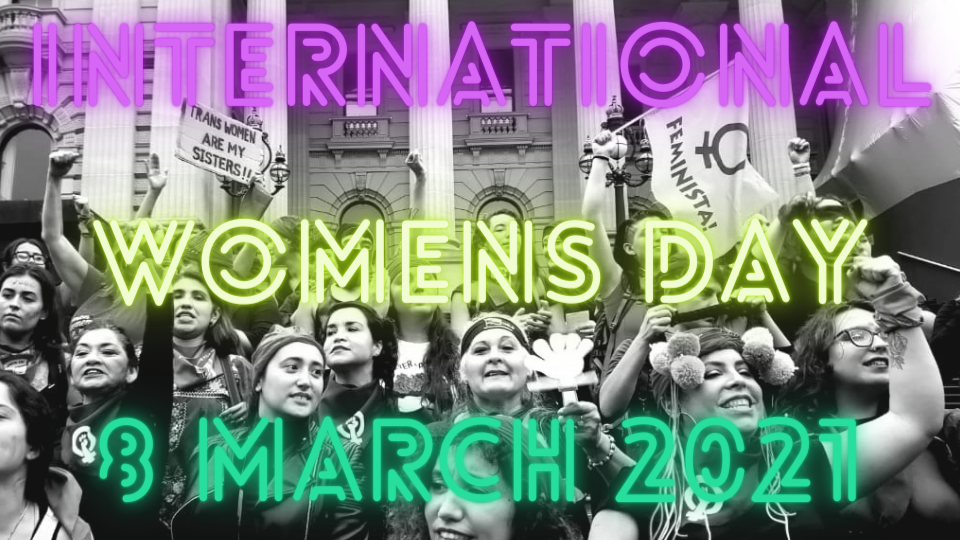 Stinky Presents - Clodagh and the Monologue.  Dealing with anxiety and performance.

The Vovos: LIVE TO AIR Performance.

Shindig: Celebrating women and gender diverse artists from the 60s

Followed by The History Tours

Join the Underfoot audio tour and hear all about Radioactive Queers.

5.30 - 6am: Stick Together  Australia's only national radio show focusing on industrial, social and workplace issues. Presented by Annie McLoughlin.

6 - 6.30am: Accent of Women  A program by and about women from culturally and linguistically diverse backgrounds.  Presented by Jiselle Hanna.

6.30 - 7am: Beyond Zero Emissions, Science & Solutions  Presented by Kay Wennegal & Nataie Bucknell.  Find out what is happening in community campaigns around the country, as well as the latest science and the solutions that are available now.

8.30 - 9am:  Women on the Line  On today's special International Women's Day show, we hear from Jay, a staunch victim-survivor of police-perpetrated domestic violence who is fighting for a safer world. Jay speaks to us about her personal journey, her attempts to hold her abuser accountable, and her public and political campaign to draw attention to the plight of the victims of police-family-violence offenders in Australia, lobby for systemic reform, and collect statistical evidence to support her initiative and provide to politicians and the media. She also discusses alternatives to policing that can keep victim-survivors safe and what keeps her fighting the good fight.  Presented by Anya Saravanan and Ayan Shirwa.  Listen here.

9 - 10am:  IWD Committee Narrm/Melbourne 2021 discuss the history of IWD globally, the history of the IWD organing collective in Melbourne and the highlights of 2021 Rally coming up at 2pm at the steps of Victorian Parliament.  Presented by Vicky Ferrada (Mafalda).

10 - 10.30am: SistaSong Su Robertson (Done By Law) and Tanja Kovac, CEO of Gender Equity Victoria yarning about women supporting women. GenVic is Victoria’s peak organisation for gender equity, women’s health and the prevention of violence against women. Tanja and Su chat about GenVic’s inspiring members. These are community-based women - individuals and groups - who gather together to support and rejoice in the lives of everyday women. We concentrate on GenVic’s recent Victorian government budget bid for a gender equal recovery from Covid19. How could this approach actively advance a gender equal future? Tune in to find out. The program includes music by women about gender equal futures.

10.30 -11am: She Bop A program that explores feminist and gender issues, with interviews, commentary and music. Presented by Yvette.  Yvette speaks with Camille Schloeffel from the grassroots movement The STOP Campaign about their Reclaim the Narrative Video Series.

1.30 - 2pm:  Raise the Roof Presented by Fiona and Pam from Housing for the Aged Action Group.  Housing stress for women.

2 - 2.30pm: Acting Up! Red Women This program celebrates the lives of revolutionary women in Australia. Passionate and dedicated, these and many other women struggled alongside their male comrades, but their stories so often go untold. Written and read by Romina Beitseen (Alternative News).  First of a 3 week series.

2.30 - 3pm: Diaspora Blues  Ayan & Serious Meerkat speak with Laila Thaker, a fearless Torres Strait Islander (Meriam Mir and Badulaig woman with strong roots to Yidinji country) and has been grinding the industry as an actor for fifteen years.Through her current role with ILBIJERRI; her previous role as Emerging Producer at Melbourne Fringe; and as founder of arts collective “Black Shell”, Laila strives to advocate for and platform First Nations people and Women of Colour in the Arts.  “I come from a long line of proppa resilient ailan leaders… my strength comes from my Mother and my wit no doubt is from my ama (grandmother). My core values as an Indigenous artist are a perfect match to ILBIJERRI’s and I’m looking forward to creating and growing with the company in a new direction”.
Listen to the podcast here.

4 - 5pm:  Doin' Time  Aboriginal women and girls are grossly marginalised, are stripped of human rights and are refugees on Country in so called "Australia".  For International Women's Day Marisa Sposaro from the Doin' Time show is honouring Aboriginal women that have been impacted by the criminal justice system, within the context of a brutal history of colonization and genocide. As well, Marisa will give voice to some very important leadership work that Aboriginal women are facilitating. The broadcast seeks to highlight the violence that Aboriginal women suffer within the system (including community corrections via strip searching, over surveillance, etc) and how recent calls by carceral feminists to criminalise coercive control could in fact not provide protection to all, (as feminists suggest) rather placing Aboriginal women more firmly within the realm of the criminal injustice system.
Listen here.

6 - 6.30pm: Behind Closed Doors Sassy Sin and Kitty Galore talk about why International Women's Day is important in relation to the sex workers community. And take a look at the gendered violence experience by sex workers with the majority of deaths/murders being female and female trans workers.

6.30 - 8pm:  Eritrean Voice Presented by women from the Eritrean community in Arabic, Tigrinya and English.

8 - 9pm:  Jane from Music Matters celebrates International Women's Day with one hour of music from her current favourite local women and GNC musicians.

9 - 10pm:  Shindig! Presented by Holly Alexander.  A recognition and celebration of lesser known female and gender diverse artists from the 1960s.

11pm - midnight: Satellite Skies  Presented by Mini & Izzy.  Soundtrack to Revolution International women's day show!Our show will be featuring a super special play list of revolutionary women, femmes and gender diverse folk to celebrate sisterhood! Featuring interviews of one another discussing 4 of our most inspirating sisters , plus a staunch speech by sistagirl sexworker activist Rosa; let's centre the voices and stories of women on the margins this IWD.