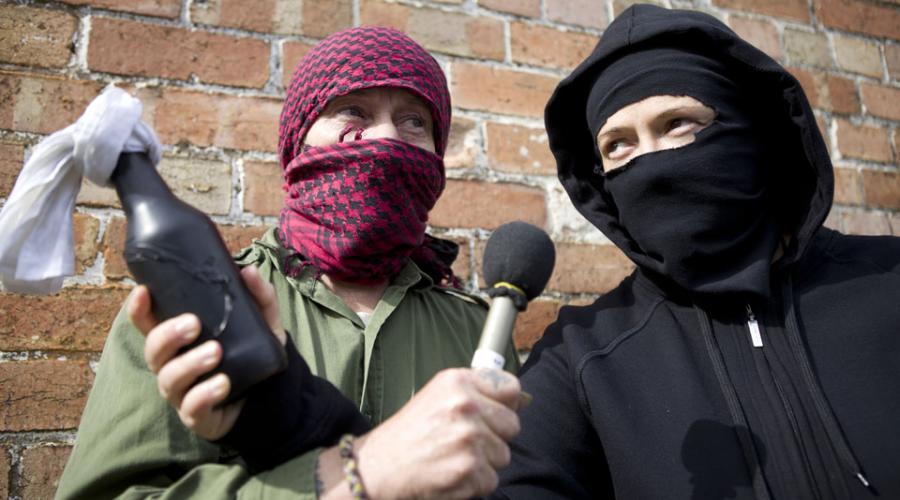 "...In contrast to the leaders of a terrorist or neo-bolshevik group, we are not at all indispensable to "our" movement. The State can't control the revolution through anything it would do to us or get us to do, because the revolution is right where we want it: OUT OF OUR CONTROL..."
(Raoul Vaneigem, 1967)

So what is Global Intifada all about?

Khepa: Global Intifada is a new hybrid music program that is all about grassroots resistance and uprising. The music we play reflects this – we only play revolutionary and protest music. We believe in diversity of tactics: Some songs are molotovs, others political graffititi, some are non violent popular resistance, while others are sabotage and guerilla warfare. Some might even be ‘working from the inside to undermine the system’; but inevitably more are straight out ‘Intifada' by any means necessary.

So what kind of stuff do you have on the program?

Qola: Each show has a different theme or genre. For instance on the anniversary of the death of militant animal rights activist Barry Horne we would focus on animal liberation music. Or when cops viciously attack a demonstration we would play songs which strike back at the police state. A couple weeks back we commemorated the 70th year since the Warsaw ghetto uprising.  Other shows might be a specific genre – reggae, blues, anarcho punk, rai, hiphop….or even a specific band or performer.

What does “Global Intifada” actually mean?

Khepa: "Intifada" is an Arabic word which translates as “uprising”. Being internationalists, the global aspect of the program is also paramount. In it's first six months Global Intifada has played songs in nearly thirty languages from more than thirty five countries and dispossessed nations. While many of these were topical, such as anti fascism or Indigenous resistance, we often focus on particular regions, especially those where social struggle is more intense. The first week of each month is always about Palestine with up to date news and music themed differently each show – international songs, Israeli anti
Zionist/occupation music, Palestinian women etc.

What other regions, issues or genres are you likely to cover?

Qola: Since Global Intifada began in December 2012 we have done shows specifically on Kurdistan, Greece and the Idle No More movement begun by first nations peoples of Turtle Island (North America) and networked with Europe, Arab Spring, New Zealand and the (ab)Original embassy movement right here in Australia - with guests knowledgeable in language and/or active experience in these struggles.
Guests have included activists and musicians from Indonesia,  Spain and Canada as well as numerous other local activists/musicians. In the near future expect to hear shows dedicated to the protest music of India, South East Asia, Ireland and Russia. Topically we have shows in the works on issues from pro queer/anti homophobia to animal liberation, and even a special ‘Dead Anarchists’ show coming up.

What's with the slogan “Music is Our Bomb?”

Khepa:  Musicians and artists have an obligation to engage in social struggles. To me the oft claimed belief that music and art are somehow above political issues is completely spineless. I'm not saying every song or play or piece of art must be overtly political to have any merit, but that creativity cannot justifiably exist in some bubble that is outside the downtrodden battle to create a better and more just world. A great example is the ongoing Boycott Divestment & Sanctions campaign against apartheid Israel.

Musicians all over the world are killed, tortured, persecuted, imprisoned, forced underground or into exile for having the conviction to stand in solidarity with the voiceless oppressed. We want every song we play on Global Intifada to be a homage to their courage. We play music not to entertain but to incite!

So remember, for the soundtrack to your uprising, listen to Global Intifada! Every Thursday, 5-6pm on 3CR, of course – what other station would have a show like this!