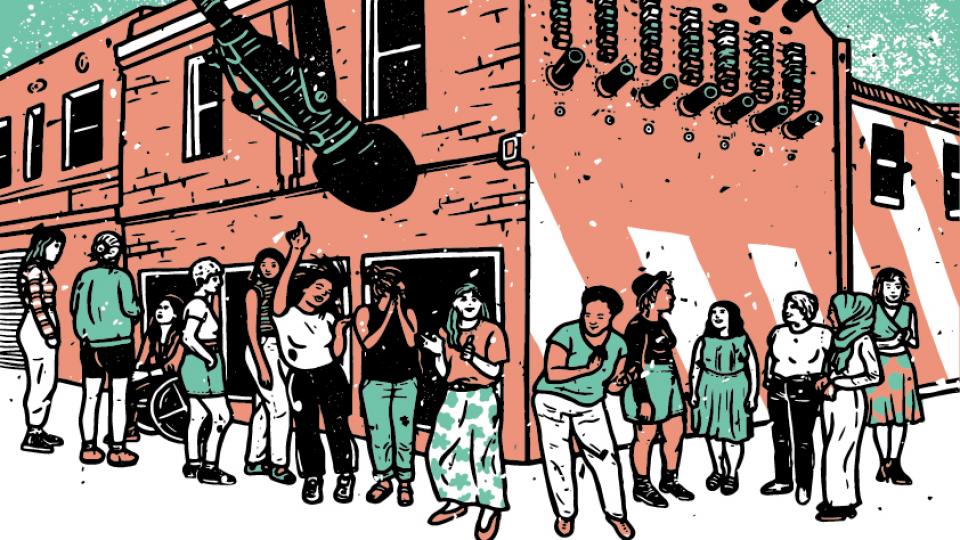 On Tuesday 8 March we celebrate International Women's Day with 24+ hours of programming and a street party from 4-8pm. Tune in from Midnight March 7 to Midnight March 8 to hear conversations about the Future of Feminism music, performance and much more.

6.30 - 7am The Radioactive Show Featuring First Nations women speaking out against the nuclear industry - from uranium mining to nuclear weapons and the dumping of radioactive waste. Listen now.

8.30 - 9am Accent of Women Information, analysis and commentary on issues driven by women from culturally and linguistically diverse and Indigenous backgrounds. Celebrating the life of Nawal Al Saadawi on the first anniversary of her death. Here she is speaking about Creativity, Dissidence and Women. Presented by Jiselle Hanna. Listen now.

9 - 9.30am Voice of the People Vox Popping with Women of Colour on the meaning of IWD with Sasja Sÿdek from Behind Closed Doors. Listen now.

9.30 - 10am Dirt Radio Friends of the Earth campaigners and activists dig down into the dirt on important environmental and social justice issues. Listen now.

12 - 2pm Music Sans Frontieres presented by the The Boite's fabulous women artists, Zulya Kamalova, from Zulya and the Children of the Underground, Ellen Chan of Moaning Lisa, and Anthea Sidiropoulos, of too many musical adventures to mention!.  Zulya, the new Boite Director, and Ellen, the new Boite Marketing Officer and Anthea join the show to tell us about their work. Listen now.

2 - 3pm Raise The Roof Older Women and Housing Justice. Presented by Fiona from the Housing for the Aged Action Group (HAAG). Listen now.

With a welcome by Aunty Jane Rosengrave and performances by SisterX, Rita Dankourian, calyx and DJ Marroushti.

9.30 - 10pm Diaspora Blues Ayan Shirwa is speaking to the women in her life who inspire her, push her, support her, to ask the burning question — how do
you break the bias? Listen now.

10 - 11.00pm Greek Resistance Bulletin The Gendered Pain Gap, Disability and the Feminization of Care with Emily, Debbie and Fani.  A discussion on Long Covid, how women's physical pain has always been psychiatrized and how the feminist movements in Greece and the diaspora should respond. Listen now.

11 - 12.30pm Stinky Presents Amplified Victoria: the adventure continues with Stinky and the Girls Rock Camps now known as Amplified Victoria. Stinky and Rae, a volunteer for Amplified Victoria, talk about the camps, the new name change and future aims. Includes archival audio recorded at the first camp over the summer of 2016-2017. All 5 rock camp Summer Specials are available here. Listen now.