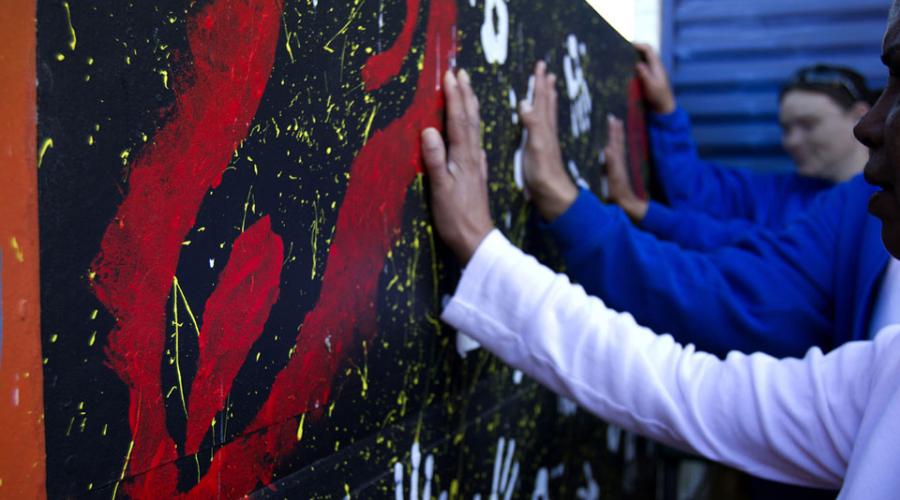 This place we call home began its white history as a place designated for the imprisonment and internment of so-called criminals, an enormous prison bound by sea. The aim of white colonial masters was to completely remove any transgressors from their ‘civilised’ society and send them far away from their families and social networks, to sever any ties with their communities and force them to endure insufferable hardship and punishment for what were, in the main, acts of desperation borne out of poverty.

Two hundred and twenty years on and this culture of punishment by separation continues, with walls and razor wire fences replacing the sea (except for the prison camps on Nauru, Mannus and Christmas Island). Now of course, society has a whole new bag of tricks to deal with ‘offenders’ – solitary confinement, state violence, neglect and rape. As was the case with the Commonwealth-sanctioned genocide of Australia’s Indigenous peoples, imprisonment is a tactic driven by vengeance, ignorance and fear.

Prisons are described on the one hand as necessary evils housing the worst of the worst in society, monsters and misfits who, if let loose in society, would have us all dead in our beds before we could blink an eye. On the other hand they are viewed as holiday resorts with tennis courts, pools, 24-hour cable television and staff to cater to your every whim. Both perceptions could not be further from the truth.

The reality is that prisons are full of people whom society would rather pretend do not exist, lest it expose our hypocrisy and apathy in addressing the underlying social issues that lead many to a life of incarceration. While the State trumpets new initiatives to deal with the issues of poverty, lack of education, health and community services, soaring mental health problems, domestic violence and so on, behind the scenes they are devising new and ‘improved’ methods of social control which see increasing numbers of people criminalised. Those who are deemed unable to contribute to a profitable society are removed and locked away, whether that be in mental health units, immigration detention centres, youth detention centres or correctional facilities.

To support this myth and continue to peddle the illusion, the control of information is imperative. Nothing gets in and nothing comes out. Stories of deaths in custody, fires, brutality and inhumane treatment are largely only getting outside prisons through prison advocates/activists and families of the women and men inside. Yet the corporate media reports what the State wants it to.

We believe that those in power, making decisions in our name, should be accountable to the people for every action they take and the management and operation of prisons and the conditions imposed therein should be no different. This is where 3CR’s Doin’ Time comes in.

Prison radio has had as presence on 3CR since 1976 when a group of anti-prison activists and students presented and produced a show focusing on Melbourne’s Pentridge Prison and the conditions within its notorious H Division.

In 1986 members and friends of the Prison Action Group took over the reins and Doin’ Time was born. Original presenters Mouse, Jenny and Jeff continued the tradition of critical assessment of the prison system in Victoria, exposing the ugly truth behind ‘correctional’ facilities and the inhumane treatment of prisoners in purpose-built places like H Division & Jika Jika.

Over the years, presenters have come and gone and we have witnessed the birth of the prison industrial complex (complete with privatisation) and the pursuit of profit and commodification of human lives. Prison numbers have soared, more women are being incarcerated than ever before and Indigenous people are still over-represented in the criminal justice system. In spite of this, or rather because of it, Doin’ Time remains a constant.

We are advocates, activists and people with lived prison experiences (those who have done time inside or suffered the loss of a loved one via a prison sentence) and aim to provide a voice for those the State would rather silence, and to extend a line of communication between our brothers and sisters on the inside and those on the outside. We recognise those in custody as part of our community, and in today’s throwaway society we want prisoners, their families and friends to know that there is support for them out here and that we refuse to take the easy and popularised route of tossing them on the scrap heap as extremists would have us do.

Those of us on the outside have a responsibility to speak out about what happens in prison, how people are treated, and the regular denial of the human rights of the millions of women and men worldwide who are suffering, dying, brutalised, humiliated, raped, and bashed in prisons everyday. That’s why we are here. Raise your voice and join us.

"We create the society, or allow it to be created for us, and therefore have the power to restructure the society that we really want ... Without community monitoring, (and action) abuses of all types will continue to occur and will be compounded by the arrogance and apathy of the bureaucrats running the system." Ray Jackson, Indigenous activist, Indigenous Social Justice Association, NSW.