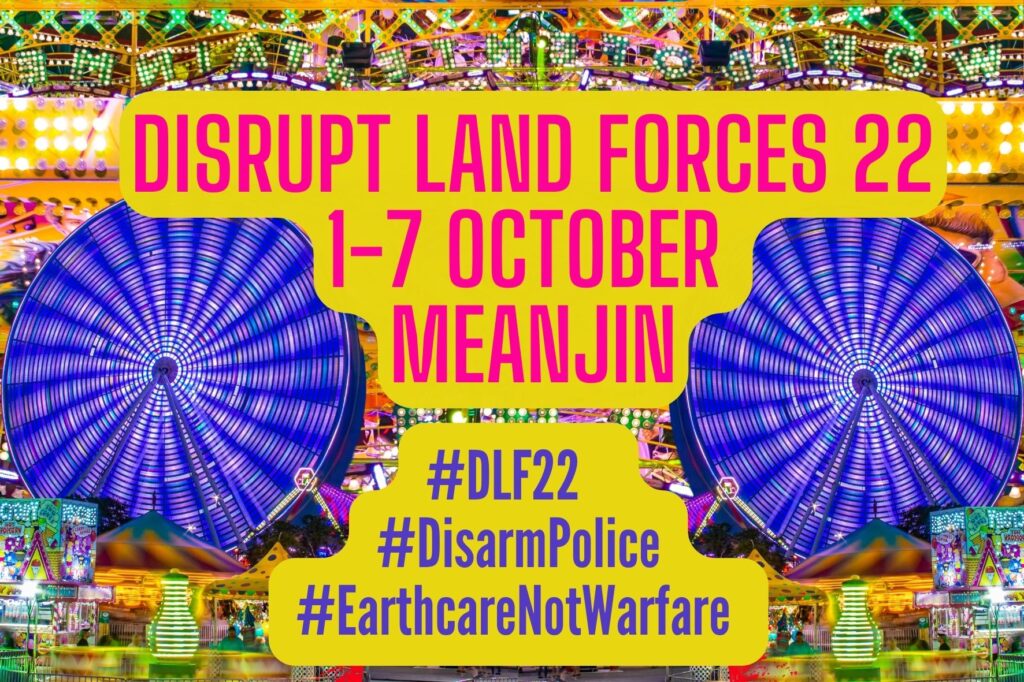 Land Forces is the largest land based weapons expo in the Southern Hemisphere. Wage Peace is organising, for the second year, a festival of resistance from October 1-7 in Meanjin ‘with all the people doing all the things to resist militarism and the multiple harms of warfare. Together.’

3CR programmers are coordinating coverage of the event, sharing the stories of those communities directly impacted by the activities of weapons companies involved and campaigns working to stop them.

Tune in to the Breakfast Show each day at 8am for an update on activities on the ground at Disrupt Land Forces.

The Radioactive Show Defence in STEM 27 August
Wage Peace oppose the 'militarisation of STEM education' and are calling for weapons companies to be banned from schools. Crunch discussed with Lil Barto an action on August 15, where around 20 people from Meanjin disrupted a STEM Education and Defence conference.  Margie Pestorius outlined the upcoming Disrupt Land Forces 2022 event.  Listen here.

Uprise Radio Stop Aidex '91 and APDSE campaigns 21 September
A short history of anti-arms fair protests from Iain McIntyre.  James and Mercedes were joined by anti-military activist, researcher and host of A Friday Rave, Jacob Grech, to discuss the Stop Aidex '91 and APDSE campaigns in more detail, as well the importance of diversity of tactics of resistance in a rapidly shifting political, social and increasingly securitised landscape.  Listen here.

Wednesday Breakfast Nuclear Ban Treaty, Future of COVID-19, The Duopoly, Militarisation & Anti-Corruption 28 September
Grace spoke to Michelle Fahy, an investigative journalist on Australia's armed weapons industry and close connections with the government on militarisation in Australia, also discussing the 'blanket secrecy' and how this links with anti-corruption measures that the government wants to put in place.  Listen here.

He also spoke with Ned Tajmpijinpa Hargraves about the Karrinjarla Muwajarri No Police Gun Ceasefire campiagn.  Uncle Ned is headed to Disrupt Land Forces as the company that makes the bullets for the AFP, NIOA, are represented at the Land Forces expo.

Thursday Breakfast  Disrupt Land Forces 2022  29 September
Since her teens, Zelda Grimshaw has been a grassroots activist for earth rights, human rights and is now a co-organiser of Disrupt Land Forces, a project forged between October 2020 and June 2021 to resist the weapons industry and ongoing militarisation in so-called Australia. Today (7:40am) we will be discussing the intersectional relationships between patriarchy, colonialism and militarised harm and the ways that nonviolence and radical respect can strengthen our resistance.  Listen Back.

Disrupt Land Forces 2022 Special:  Conflict and Environment, AUKUS & Truth Not War 29 September
Mercedes Zanker presents a selection of interviews from the archive: Linsey Cottrell, Environmental Policy Officer at the Conflict and Environment Observatory, a UK based organisation that tracks and publishes global military emissions reporting and data;  anti-military researcher and host of 3CR’s A Friday Rave, Jacob Grech speaks about how the AUKUS countries are all involved in the persecution of Julian Assange and cyber security;  Izzy Brown Satellite Skies speaking at the Truth Not War Rally on September 18, on why its so important to get up to Disrupt Land Forces, and to fight back against militarism anywhere and everywhere.

Disrupt Land Forces 2022 Special: War on West Papua  30 September
This program will features an interview with Zelda Grimshaw, a campaigner with Wage Peace. Zelda speaks about the Peace In Papua campaign, which tracks and records who is profiting from the war and military occupation in West Papua at waronwestpapua.org. Zelda also highlights the importance of trans-border solidarity, and why you should get up to Disrupt Land Forces 2022.

Solidarity Breakfast
Disruption of Land Forces  1 October
Annie McLoughlin catches up with Zelda Grimshaw from Wage Peace and Cyndi Makabory, a West Papuan Activist, who are part of the resistance to the expo. Listen here.

The Radioactive Show  Disrupt Land Forces 2022  1 October
Walpiri elder Ned Tjampijinpa Hargraves speaks about the Karrinjarla Muwajarri campaign that is a calling for a ceasefire and no police guns. The main manufacturer of police bullets is the company NIOA, a major sponsor for Land Forces 2022.  NIOA in partnership with Winchester dominate the law enforcement market.  In 2021 they successfully tender for the bulk of armaments supply to the NT police worth a total of $1.8 billion. Peace & anti-military campaigner and event organiser Andy Paine let's us know what's planned for the week ahead.  Listen here.

Disrupt Land Forces 2022 Special:  Nuclear First Nations  1 October
Raucous Anti-AUKUS Caucus recordings, focussing on creeping militarism, weapons manufacturing and nuclear weapons and waste impacts on First Nations country and communities in so-called Australia and the Pacific Islands from a series of online anti-military symposiums convened by Renegade Activists.  Featured interviews: Aunty Sue Coleman-Haseldine, Gogotha Elder and honorary co-president of the Australian Nuclear Free Alliance by Liz Turner on December 2, 2021;  anti-nuclear campaigner Dave Sweeney, on the impacts of a proposed nuclear waste dump at Kimba and the ongoing battle of the Barngarla people in opposing it;  Talei Mangioni, a PHd candidate whose current scholarship charts the Nuclear Free and Independent Pacific (NFIP) movement across Oceania; and Zelda Grimshaw speaking at the No Guns Rally for the Karinjarrla Muwujarri national day of action in Naarm on June 18, 2022. *Content warning for listeners, this speech mentions police violence and Aboriginal deaths in custody.

Tuesday Breakfast Disrupt Land Forces and anti-weapons activism  4 October
At 8am Aunty Sue Coleman Haseldine speaks to Kannagi about her experience surviving nuclear tests in South Australia in the 60s, the effects of ongoing weapons testing on her land and the importance of anti-weapons activism. Aunty Sue joined us from Disrupt Land Forces currently happening in Meanjin.  Listen back.

Wednesday Breakfast No Police Guns campaign at Disrupt Land Forces  6 October
At 8am Grace speaks with Ned Tjampijinpa Hargraves (aka Uncle Ned), discussing the No Police Guns campaign & Queensland company NIAO who makes guns for the Australian Defence Force. We further discussed the social and environmental ramifications that will impact remote communities.  Listen back.

Disrupt Land Forces 2022 Special:  Reflections on a week of action  6 October
Marisol Salinas (Mujeres Latinoamericanas) spoke with:  Cloud Hannigan who was arrested blocking the Land Forces bump in on 29 September; Aleea Monsour from Justice for Palestine Meanjin Brisbane speaking about  'SAY THEIR NAMES - Remember Palestine'  a vigil on the evening of 5 October to oppose the global arms industry that profits from the crimes of colonialism in Palestine and in many parts of the world, including so called Australia;  and Andy Paine one of the Disrupt Land Forces organisers.