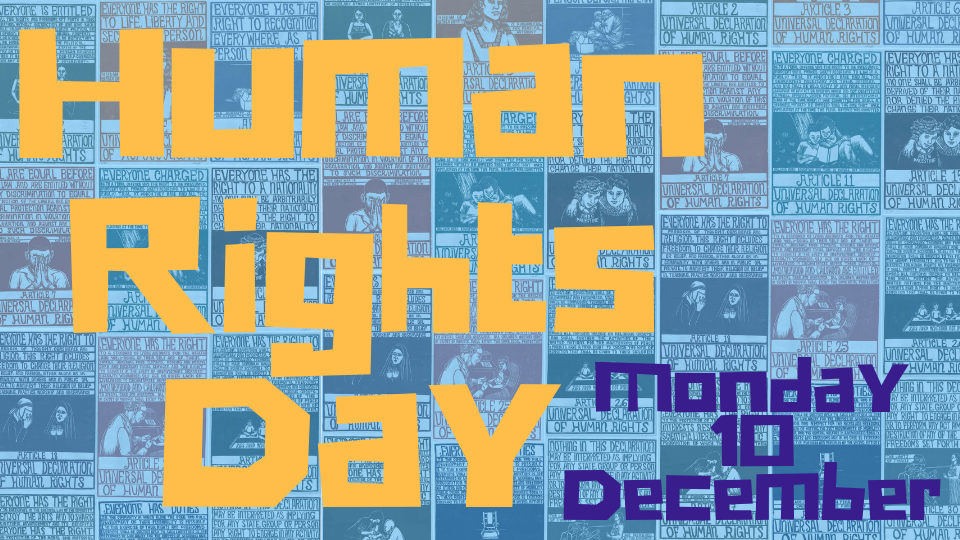 Join 3CR's Human Rights Day broadcast on Monday 10 December.
7am - 2pm and across the day with  Monday Breakfast, Women on the Line, Mujeres Latinoamericanas, The Black Block, Doin Time, Beyond Zero Emissions Community and special guests.

On this International Human Rights Day Monday breakfast along with the 3CR community will highlight some of the human rights issues that are shaping Australia as we come to the end of 2018. This will be by no means the only issues nor are they necessarily more important than another.  We strive to make these and other issues more visible and work with others to highlight the problems as we strive to find solutions in a world looking for answers.

We have Chris Breen from RAC talking about refugee issues and the Stand up, Speak out: Refugee Rights are Human Rights rally happening later in the day, Kelly from Roominations will be talking housing issues and Shan about China and rising tensions - how that plays out for people in the every day.

8.30am  Women on the Line - Another Stolen Generation: First Nations rights & out of home care

Women on the Line brings you a discussion of the impact of recent changes to child protection legislation in NSW and the rising number of Aboriginal and Torres Strait Islander children in out of home care in Australia.

9.00am  Michele Vescio speaks with 3CR Tuesday Breakfast broadcaster Ayan Shirwa, about the rights of women of colour in the context of #IHRD, the #16DaysofActivism, the #MeToo social media movement, and her upbringing as an African Muslim woman in so-called Australia.

Lidia Thorpe has been the member for Northcote in the Victorian Legislative Assembly since November 2017 and is a member of the Victorian Greens. Thorpe won the Northcote state by-election on 18 November 2017 to become the first female Aboriginal elected to the Parliament of Victoria. She is the Greens Spokesperson for Aboriginal Affairs, Aboriginal Health, Sport, Training and Skills (including TAFE), Consumer Affairs, Mental Health.  Lidia will speak on Treaty and Indigenous Human Rights. Sister Patricia Fox is a 72-year old Australian missionary who has lived in the Philippines for 27 years, helping and supporting the farmers, workers and indigenous Filipinos. She is a staunch human rights advocate and an advocate of poor and struggling Filipinos. Early this year, she joined an international fact-finding mission to Mindanao where they witnessed and documented many cases of human rights violations. President Duterte disliked her advocacy work and ordered her to leave the country.  Sr Pat is an elected member of the National Council of Karapatan (an alliance of human rights organisation and programs in the Philippines)

The Latinamerican Women's Program will be having a special show for Human Rights Day 2018!  The focus will be Human Rights and Indigenous Peoples across Latin America, and beyond to so-called Australia, the Asia Pacific and more... We will discuss human rights and in particular the rights of autonomy and self-determination and what these mean for Indigenous peoples around the world.

11 – 1pm The Black Block looks at the UN Genocide Convention 70 years on from it’s introduction on Dec 9th 1948 and seek to get a picture of why Australia ratified the Convention on the Prevention and Punishment of the Crime of Genocide but never passed it in to law.  Featuring special guests Irene Watson and Brian Greig.

Irene Watson is a Professor of Law at the University of South Australia.  A proud Tanganekald and Meintangk woman from the Coorong region and the south east of South Australia, Irene Watson was the first Aboriginal person to graduate from the University of Adelaide with a law degree, in 1985. She was also the first Aboriginal PhD graduate (2000) at the university, winning the Bonython Law Prize for best thesis. Her research motivation has been clear from the outset: to gain a better understanding of the Australian legal system that is underpinned by the unlawful foundation of Terra Nullius.

Brain Greig OAM was an Australian Democrats member of the Australian Senate from 1999 to 2005, representing the state of Western Australia.  In the Senate, Greig was responsible for introducing legislation to outlaw genocide in Australia which was unsuccessful, blocked by the Liberal–National government.

4 - 5pm  Doin Time will produce a special Human rights broadcast, concentrating on Aboriginal rights, political prisoners and the detention of Asylum seekers. Doin Time will be interviewing Maryanne Mackay, aboriginal activist from WA, about a landmark court case, and also Peter has interviewed a woman from Switzerland about political prisoners, and the importance of letter writing.

Featuring special guests Dr Scott Leckie (The law around Displacement solutions and The right to land or a place to live), Stella Miria Robinson (Pacific Impacts), Tim O'Connor from Amnesty (Sudan, Kiribas and the Right to food and water), Jagveer Singh on The rights of the child.