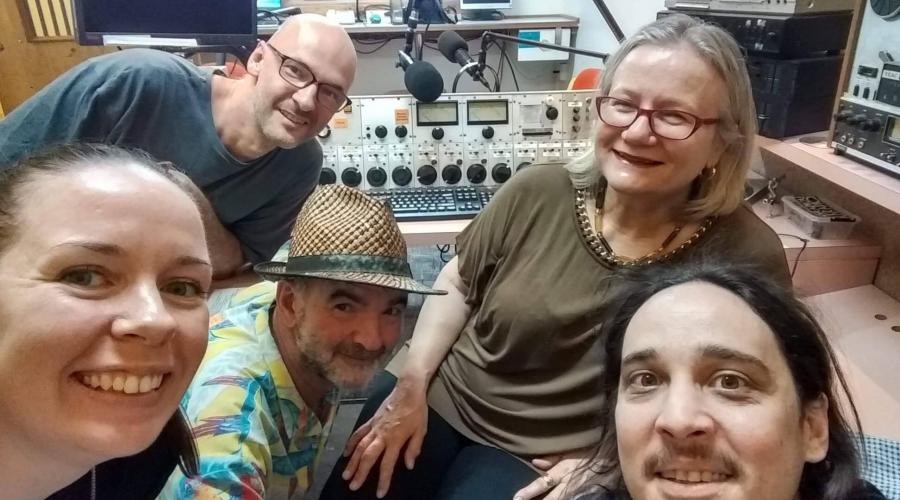 Spoken Word is a half hour program dedicated to poetry and performance. We provide a grassroots platform on 3CR for the poetry community, making connection between live performance, printed literature and radio listeners. Our guests are contemporary poets who read and discuss their works. Spoken Word is inherently eclectic and gives voice to diverse forms of poetic expression.

Contribute your own poem or story to 3CR Spoken Word

If you have a piece of original work to share, please use the form below to share a recording of it with us. If suitable, we will broadcast it on a future Spoken Word show.

We invite you to join us and our guests every Thursday at 9 in the morning to enjoy exciting, insightful and interesting poetic works on Spoken Word.

The inaugural broadcast of 3CR’s Spoken Word was on Thursday 21 May 2009. The original team of presenters was Rhonda Jankovic, Santo Cazzati, Peter Goodyear and Gerard Watkins. Peter and Gerard moved on early in the life of the programme but have forever left their contributions to Spoken Word. The voice of Gerard Watkins can still be heard in the introduction of the program over the classic bossa nova track Mojave by Antonio Carlos Jobim. Spoken Word was deprived of the devoted and meticulous work of its founder Rhonda by her untimely and early death in 2012.

“Spoken Word is an inspirational forum, showcasing many styles and forms of poetry, voiced by Australian poets from diverse backgrounds. The programme has an international audience and I am delighted to be included, both as a member of such an audience and as a performing poet.” Avril Bradley

“A wonderful opportunity to present my poetry in dialogue with a fellow poet and empathetic interviewer.” Marietta Elliott-Kleerkoper

“I have read my poetry on local radio before, but the Spoken Word program was a unique opportunity to discuss my poetic process in some depth and to present a range of poems. I have really enjoyed hearing other interviews where the same careful and thoughtful style towards the poet allows their many sides to shine. But perhaps its most valuable function is to take the pleasure and liveliness of this art form to an audience who may never get to a live performance.” Susan Fealy

“Spoken Word on 3CR isn’t a publicity factory or a babble of trivia. It’s smart, humane, funny, provocative and never predictable. We talk as if poetry matters in the real world, and therefore it does.” Andy Jackson

“Spoken Word is a weekly opportunity to be inspired by insightful conversations exploring poetry and language.” Marian Spires

It was a shock to hear today of the death of Rhonda. We knew she was battling against cancer with no prospects but we did expect her to go on into next year. This death has been too sudden and has robbed us all of much beautiful work which Rhonda was expecting to complete for her and our satisfaction.

Rhonda presented two radio programmes on 3CR over about ten years. It was her idea to launch the Spoken Word programme from scratch at the end of 2008. She cast out into Melbourne's grassroots poetry community with very little knowledge of it or contact with its members. Her passion, precision and persistence created four pilot programmes with a number of us poets and after the one in which I was involved, she asked me if I would like to join her in creating a regular programme.

I said yes without thinking about it very much and soon discovered that Rhonda had great determination and thoroughness about this project. I stuck with her not fully realising at first just how much energy and thought she was putting into it all. Months later, when we got the programme off the ground in its still now regular timeslot of every Thursday morning, I realised her vision had in fact completely sucked me in and had made me realise a number of important aspirations of my own – to archive Melbourne's amazing cutting edge grassroots poetry talent and innovation; to share the intimacy of the radio studio with poets and friends I admire on our scene; to be part of a genuinely independent non-corporate left progressive media outlet; to live my long forgotten childhood fantasy of being a radio voice.

Rhonda knew that all of the presenters we used on Spoken Word had very different styles and strengths and celebrated this fact while still attempting an overall unified vision for the show. Her own on air style was distinctly calm and super organised. While I could match her in organisational skills (which she repeatedly acknowledged), it was her calm aspect that taught me to slow down my usual frenetic vocal delivery and agitated manner towards guests. Watching her panel and edit programmes gave me even more insights and ideas which I expanded.

I think a lot of people know Rhonda's voice but few have met her. While I and my two other co-presenters Koraly Dimitriadis and Jessica Alice are used to getting out and about seeking out relatively extroverted performance poets for the programme, Rhonda specialised in finding very talented poets who were not performers and who may have been marginalised in some other ways too. Over these few years, she built up a network of such poets, providing much needed relief from the rest of us on the team and our preferences.

I always believed Rhonda was a fabulous poet in her own right and I'm pleased to notice that others began to think so too in the last year of her life as her publishing opportunities increased. She saw the programme as a platform for other writers and not herself and I now wish I had pushed her to record her own poetry more.

There were so many other aspects to Rhonda's life that were notable – she attended and plugged every major left wing demonstration (she would always ask me when was the next refugee protest), marching along with her walking stick no matter what the distance or weather; she was preparing her PhD in history; she was doggedly battling the New Zealand government for many years over its treatment of her as a child; I'm sure there's a whole lot more I don't know.

3CR knew exactly what a dedicated member of the station she was. She was to receive the Spirit of 3CR Award on Thursday night at the annual awards night. She did get to hear about this and in fact when I returned home this afternoon from work, I found in my letterbox her acceptance speech which she posted last week and which she asked me to read at the awards night. It is an inspiring page of writing which will be my utter privilege to present.

Santo Cazzati is a performance poet on Melbourne's grassroots poetry scene, winner of the Shelton Lea Award for best solo performance at Overload Poetry Festival, a longtime revolutionary socialist and a presenter of the Spoken Word radio programme on 3CR. 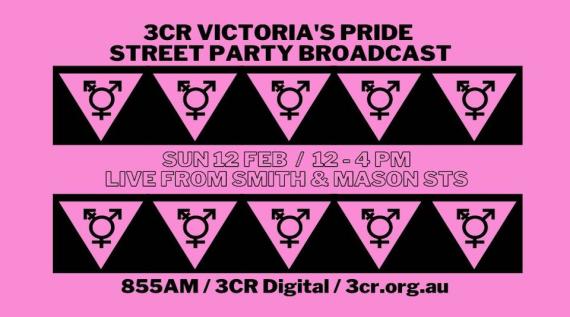 Kids with Attitude
Published...Or Not
The Boldness
3CR Summer Specials
20 Years on the Inside