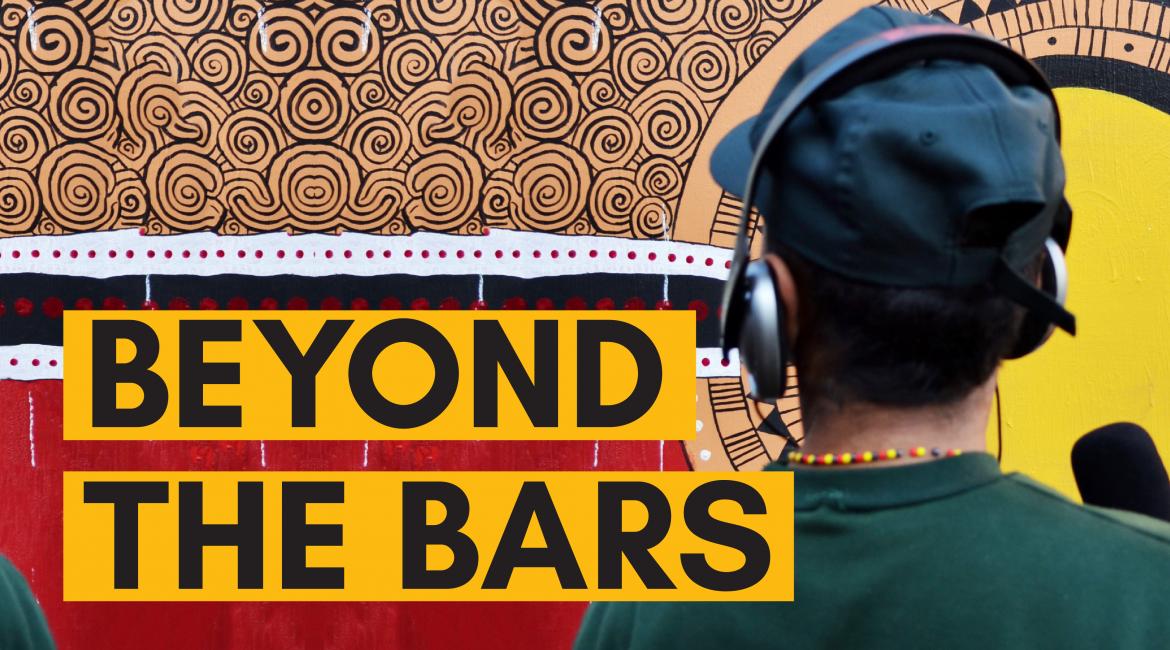 Beyond the Bars is a unique series of live prison radio broadcasts that give voice to Aboriginal and Torres Strait Islander inmates in Victorian prisons. The broadcasts are presented by 3CR's First Nations broadcasters during NAIDOC* Week (July). Beyond the Bars began in 2002 and each year it features songs, stories, opinions and poems from the men and women inside, while also connecting them with culture and community. *National Aborigines and Islanders Day Observance Committee
Current affairs
Human Rights
Indigenous
Tweet
More 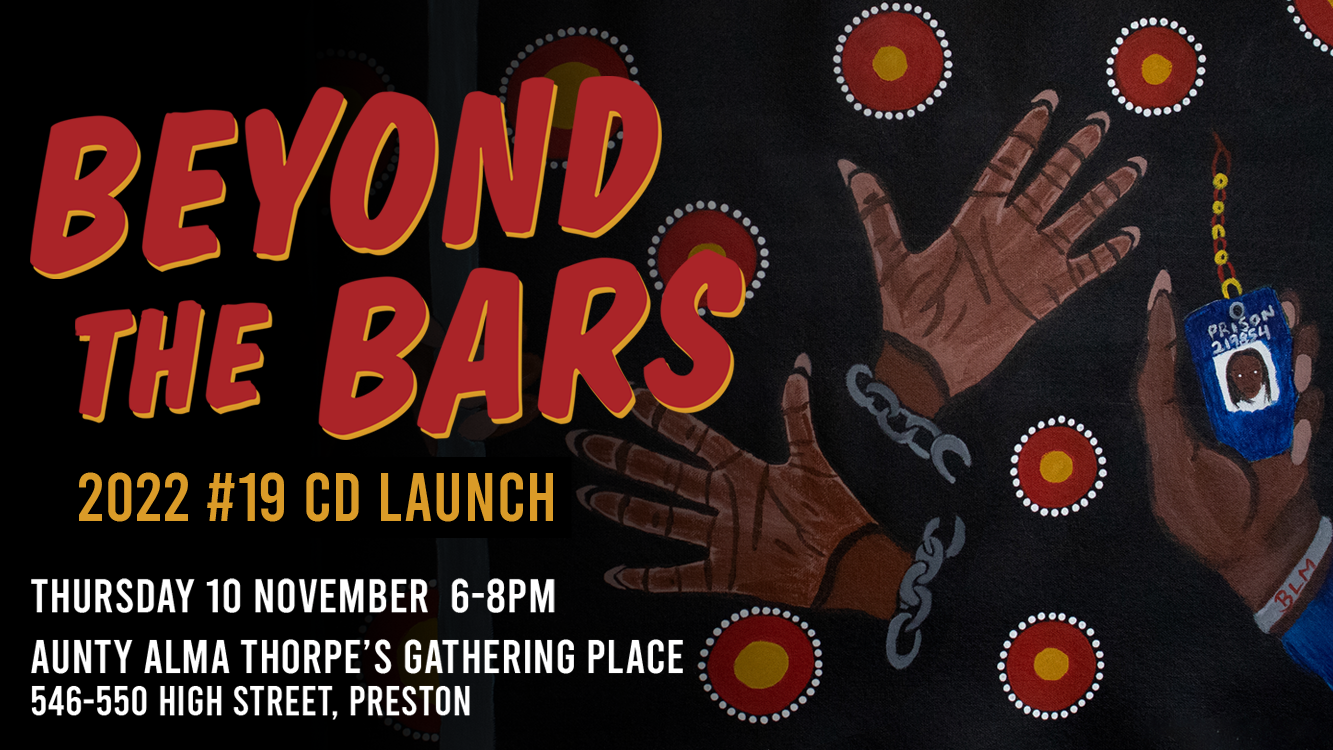 A Melbourne Social Equity Institute community engagements grant financed the digitisation of the Beyond the Bars CDs and posters. The materials were digitised by the University of Melbourne Digitisation Centre. With thanks.

The following is from 3CR's book 'Radical Radio: Celebrating 40 Years of 3CR' (2016) and provides a history to the Beyond the Bars project.

The award-winning Beyond the Bars is one of Australia’s only live prison broadcasts. Beginning in 2002, it is held annually each July during National Aborigines and Islanders Day Observance Committee (NAIDOC) Week and gives voice to Aboriginal and Torres Strait Islander inmates incarcerated in Victoria’s prisons.

According to the Human Rights Law Centre, in 2014 Victoria had one of the largest increases in Aboriginal and Torres Strait Islander imprisonment rates in the country, with Aboriginal people incarcerated at eleven times the rate of the non-Aboriginal population. This situation is echoed in the words of the late Paulie from Beyond the Bars 5: ‘Aboriginal people have been in brick and barbed wire all over Australia since Federation. We can take our shit right back to the First Fleet. My philosophy is it’s a white man’s world; it’s a black man’s jail’.

Beyond the Bars initially began as a conversation in 2001 between Port Phillip Prison Aboriginal Liaison Officer Shaun Braybrook and 3CR program manager Jay Estorninho, with the idea of holding a live broadcast from the men’s maximum-security prison for Sorry Day. However, the project didn’t become reality until 2002, when Shaun broached the idea of broadcasting during NAIDOC Week with then director of Port Phillip Prison, Kelvin Anderson. In 2002, seven Aboriginal programmers from 3CR broadcast live for four hours from Port Phillip Prison in Laverton. Gilla McGuinness, Johnny Mac, Freddy Norris and Haiden Briggs presented the Koori Youth Show, Kutcha Edwards hosted Songlines, and Ross Morgan and Lester Green presented Living Free, a program dedicated to drug and alcohol rehabilitation.

For the inmates involved in the project, Beyond the Bars had an enormous impact. ‘When you’re inside a prison everything’s taken away from you,’ says Shaun. ‘You lose a lot of your power. You’re told when you shower, you’re told when you eat, but it was really empowering for the fellas to speak about culture, to be able to know that family were listening on the outside, that people listen to their stories. It really boosted them up, gave them self-confidence, belief, being able to talk to the community, and they were able to walk proud within the prison. The whole prison would listen to it.’

For Kutcha the injustice of being a member of the Stolen Generations affected his journey through the project. ‘Maybe because I had lived most of my life, my childhood in an institution, you know, eleven years, from age eighteen months to thirteen years old, in an institution in the Eastern suburbs, so I knew what it was like,’ he reflects. ‘I knew how I felt, and how destructive that kind of lifestyle can be, especially as an Aboriginal person. And denial of my human basic right, which is to be with my family, to be denied that. Not only that, my language, my culture, my extended family, my spirituality––in this institution. So I suppose with my work at 3CR, it was only a flow-on effect that we would go on to create Beyond the Bars.’

In 2003 broadcasting also began with women prisoners at the Dame Phyllis Frost Centre at Deer Park, with Kutcha and the late Lisa Bellear. Lisa played a key role in the Deer Park broadcasts, facilitating writing workshops with the women and supporting them to tell stories about their lives.

In 2006 Lisa told The Age: ‘What I tried to do was get them writing and reading poetry for the broadcast. I tell them as long as you've got one word down it means you've got the ability, and we'll work from there. People have prejudice against work produced in a prison situation: “Oh, it's just jail poetry”. But this is a powerful and valid form of expression’.

A Beyond the Bars double CD featuring artworks, stories, songs, cheerios, and the voices of inmates has been compiled and distributed for free since 2004. Beyond the Bars is also broadcast on the National Indigenous Radio Service (NIRS) and simulcast on Melbourne Indigenous radio 3KND. As Beyond the Bars broadcaster Shiralee Hood told the Mandurah Mail, ‘In media and society, there are stereotypes about why Aboriginal people are over-represented in the prison system. This makes it personal. When you hear someone’s story, you understand’.

‘Over the last thirteen years we’ve connected family that wouldn’t have gotten to hear their brothers and sisters in the prison,’ says Gilla. ‘We’ve always come through the front door, never off the prison truck.’ It is the respect for the broadcasters involved and for 3CR that has seen Beyond the Bars grow to include six Victorian prisons in the annual broadcast.

Both Gilla and Kutcha speak of the importance of stepping back and letting young Aboriginal broadcasters be involved. From his thirteen years of experience with the project, Kutcha offers this advice: ‘It’s not an easy road, radio, but if I can impart anything it’s this––“I’ve been where you’ve been, and I can have that conversation rather than interviewing you”. Sit and have the conversation so they feel as though they’re around the kitchen table or the fire out the back or on the river, ’cause that’s where they wanna be. Fair enough they know that they’re in a jail, but for the ten or fifteen minutes that they’re having a yarn, they don’t wanna be there. They wanna be home. And that’s how I sort of worked my way through Beyond the Bars, to sit and have the conversation rather than the interview’.