The fight against trade union repression in the Asia-Pacific, Archer Magazine's funding cuts and Love and Thoms v Commonwealth 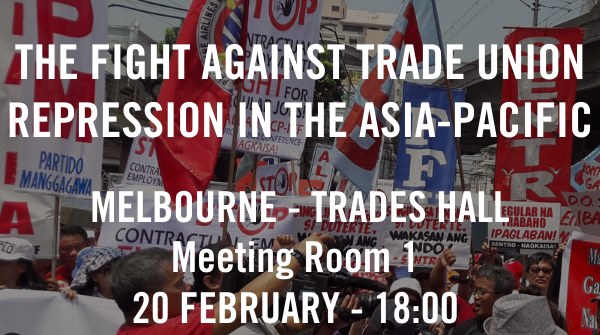 Acknowledgement of country//
News headlines//
We speak to Elmer Labog and Glen Thompson about the fight against trade union repression in the Asia-Pacific//
We play a segment from The New Arab Podcast about feminism in Lebanon//
An interview with Roz Bellamy, online editor at Archer Magazine. They discussed Archer's recent Pozible campaign after it was announced that the publication was unsuccessful in receiving government funding//
Julian Burnside, barrister, human rights advocate and President of Liberty Victoria, talks about the High Court's ruling that states that First Nations people are not to be considered 'aliens' under the constitution and cannot be deported//
SONGS
Sold Out by Baby Rose//
Survive by DRMNGNOW//

Awake in a Dream by Barry Biggs//