In 2006 3CR created a Seeds of Dissent! Calendar to celebrate 3CR's 30th birthday. The full colour, nationally distributed calendar teemed with radical dates, ideas and inspiration for social change. The calendar sold out of its 2000 copies. The last calendar was produced in 2010 and the station does not currently produce a calendar. 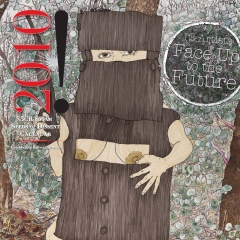 Face Up To The Future! 3CR’s fifth Seeds Of Dissent Calendar looks ahead to imagine a future we want to live in, while also celebratingAustralia’s radical history. We asked 12 artists who are part ofAustralian activist culture to contribute an artwork that reflects their idea of the future. Some artists have created images that imagine the ideal future and some have chosen to depict issues we need to address today in order to achieve it.

Australian history re-envisioned with a cheeky female bushranger,uranium mining and the need to recognise the interdependence ofecology, the tyrannical expectations of female beauty, the return of tumbling as a form of transportation (!), Indigenous people at the heart of popular culture… these are the some of the issues explored by artists such as Arlene Texta Queen, Deborah Kelly, Bindi Cole, Adam Hill, Jacqui Brown, Tom O’Hern, Mitch, Jo Waite, Rayna Fahey, Tom Civil, Mickie Quick, Lachlan Conn and Paul J Kalemba. 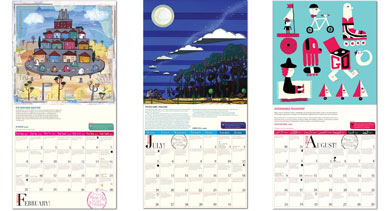 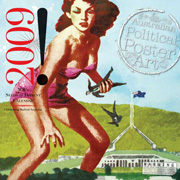 The 2009 Seeds of Dissent calendar documented radical history through the visual mass medium of printed posters used for decades by Australia’s social agitators as a tool for social change.  Filled with inspirational images and storiesof the people who asked for a better Australia, this calendar offered a fascinating insight into the people who have fought for our rights, and payed homage to their efforts. From the small collectives making photocopies to promote a rally or dance, to the artists who painstakingly lined up multiple-colour screenprints. 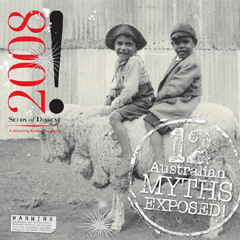 The 2008 Calendar exposed Twelve Australian Myths with satire and aplomb as we asked questions such as: 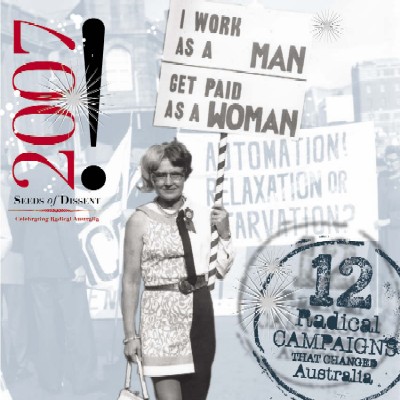 The 2007 Seeds of Dissent Calendar profiled twelve campaigns that changed - and are still changing - Australia.  Celebrating Australian Activi with activist photographs from modern day and historic struggles campaigns featured in this calendar included Equal Pay for Women, the 1910 Anti-Conscription fight back, the 60's and 70's Gurindji and the Buga Up!s 1980's anti-smoking campaign. 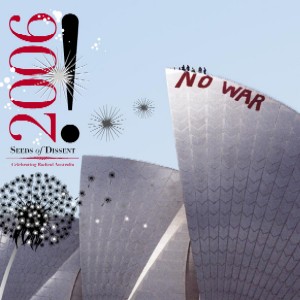 In 2006 3CR produced our very first Seeds of Dissent Calendar to celebrate 30 years of Australian activism and to mark 3CR's 30th birthday.  This first calendar honours with a rich archive of photographs Australia's rich and diverse history ofrevolutionaries, renegades, and just plain outraged folks who make trouble, resist colonisation, stick up for their rights and improve the lives of all. 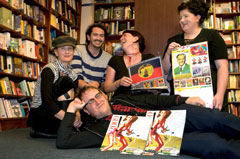 Pictured above at the November launch at Readings in Carlton is the 2009 Calendar Team. Left to right are Bree, Tom, Rachel and Elanor with Iain stretched out in front.

How To Get a Job DVD A 15min comic satire about being middle aged, unemployed and unlikely to be employed is the funniest film about the Job network.

Audiences have given it a big thumbs up with American viewers describing it as; 'Hilarious', 'Excellent acting'. Locals agree; 'Deserves an Oscar',  ‘Makes great points'.

It comes with a second short film about the fight against development in Northcote called No more than four.
$5/ $8 (posted) all proceeds to 3CR.

Spread the Seeds of Dissent with our colourful logo tshirts. 3CR's Seeds of Dissent tshirts are 100% cotton and non-sweatshop.

Designed by Tom Civil in collaboration with 3CR's Promotions Sub Committe and modelled by Pier and Leanne with Colm in the forground.


Available in many different colours and prints. $25.00

T-shirts are available in the following colours:

T-shirts are available in the following sizes:

Sizes refer to chest width measurements in cm from armhole to armhole.