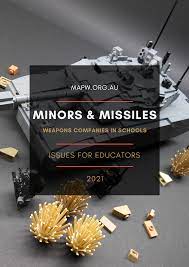 This Radioactive Show explores the 'partnerships' between defence companies and schools.

Featuring interviews with Elise West, Executive officer of Medical Association for Prevention of War, who will discuss key issues in their recent report- Minors and Missiles.

Dr Bev Hall, who became alarmed at the influence of defence in education when in 2013 she discovered the local high schools her grandchildren attended were  ‘defence schools’, and set out to work in an alliance against this.

Later in the show we hear from Miriam Torzillo, about a new network opposing defence in schools as well as promoting peace and climate justice education.

Crawl out through the fallout - nuclear tunes