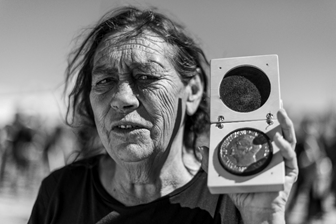 September 27 marks the anniversary of the first of the British atomic tests on the mainland that began at Maralinga in 1955.  On this show we look at the cultural, environmental and toxic legacy left by Britain's atomic bomb tests at Maralinga and across the country.

First up we hear from Dr.Jim Green National Anti-nuclear campaginer with Friends of the Earth Australia who talks us through some details of the atomic tests and trails,  the numerous botched clean-ups that have left the lands of the Maralinga Tjarutja in particular heavily contaminated.  He explains the findings of a report released by the School of Earth, Atmosphere and Environment at Monash University in May 'The nature of Pu‑bearing particles from the Maralinga nuclear testing site, Australia' that warns that degrading particles remaining from the tests are still releasing plutonium into the environment and further clean-ups are required.

Aunty Sue Coleman-Haseldine, Kokatha Mula Elder and President of the Australian Nuclear Free Alliance, joins us from Ceduna, South Australia to talk about the ongoing impacts that the atomic testing has had on her country, health, family and culture.  She touches on some of the current threats posed by the Federal Government's proposed national nuclear waste dump at nearby Kimba and Southern Launch's rocket testing trails.

Music is 'Maralinga (Rainy land)' by Paul Kelly and the Coloured Girls.

Crawl out through the fallout - nuclear tunes