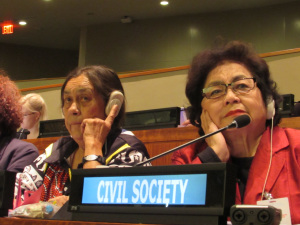 UN negotiations for a nuclear weapon ban treaty started with a one week session at the UN at the end of March. The aim of the ban is to de-legimatise nuclear bombs and put them on the same legal footing as other weapons of mass destruction, working much like the prohibitions on the use of chemical and biological weapons. This show includes a speech at the UN by Aunty Sue Coleman-Haseldine, a Kokatha elder and nuclear bomb survivor from South Australia, and Tilman Ruff, one of the founder of International Campaign Against Nuclear Weapons or ICAN and co-president of the International Physicians for the Prevention of Nuclear War.

Music by Combat Wombat (Go to combatwombat.com.au to hear their new album)