If People Powered Radio: 40 years of 3CR at Gertrude Contemporary 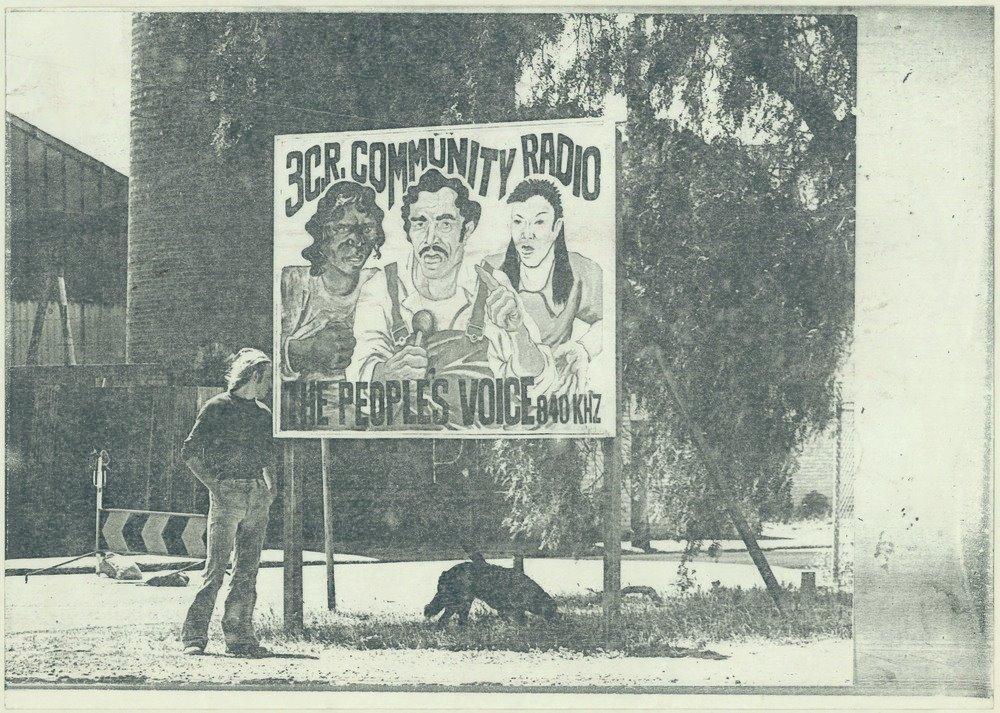 'If People Powered Radio: 40 Years of 3CR' is a collaboration between Fitzroy's oldest community radio station and one of Fitzroy's oldest galleries and studio complex, Gertrude Contemporary.

Celebrating 40 years of 3CR, the exhibition will explore the station's history of radical broadcasting and how it has thrived in its endeavour to foreground the often unheard voices of Aboriginal people, women, workers, ethnic and GLBTIQ communities, people with disabilities, environmentalists, artists and musicians. The exhibition will present a combination of recordings, technological hardware, photographic and textual documents from the station’s vast historical archive.

Newly commissioned artworks by local artists will frame and interpret the station’s history of radical broadcasting. In addition, over four Friday evenings from 5–7pm there will be a series of live broadcasts from the exhibition space featuring campaigns, current affairs and local musicians, including one curated by sound art organisation, Liquid Architecture and a Saturday evening live broadcast of 3CR's experimental music program, Let Your Freak Flag Fly. 'If People Powered Radio' presents an opportunity to explore the politics of broadcasting and listening, and the different material and aesthetic supports that facilitate 3CR’s engagement with its diverse and progressive publics.

FRIDAY 1 APRIL, 5–7PM
In this, the first of our live broadcasts, we celebrate 40 years of Indigenous programming on 3CR. With an all-star cast featuring Viv Malo, Robbie Thorpe, Gilla McGuinness and Johnny Mac, we’ll explore some of the key struggles of the past 40 years with a strong focus on the future. Live music by Bart Willoughby, Karol Karpiny, and other surprise guests.
FRIDAY 8 APRIL, 5–7PM
Community language programming has formed a key part of 3CR’s broadcasting since the station began—with many programs operating in support of resistance movements elsewhere. This program will take us on a journey through these programs and ask why community language programming is so important.
FRIDAY 15 APRIL, 5–7PM
Presented by Liquid Architecture.
38 years on from the last episode, aired in 1978, 3CR’s ‘New and Experimental Music’ program reunites with original presenters Warren Burt, John Campbell and John Crawford. Originally titled ‘Amputations,’ this revolutionary radio show was closely connected to the avant-garde activities of Clifton Hill Community Music Centre and other sites of Melbourne underground tumult. Our hosts will play a selection of (tuneless) tunes and chat about the history of the show, including the intense opposition they faced from factions within the station who vigorously opposed everything about new music, and especially sound poetry.
FRIDAY 22 APRIL, 5–7PM
In our final Friday night broadcast we introduce you to some of 3CR’s most notorious troublemakers and reflect on a selection of the many campaigns they’ve participated in. From the 1998 Waterfront Dispute to the protest against the Jabiluka uranium mine; from the Aboriginal Tent Embassy to Manus Island; the history of 3CR is also a history of the social and political struggles of the past four decades.
SATURDAY 23 APRIL, 2–3PM
Hear from long-term 3CR staff member, Juliet Fox, about the station’s 40th birthday book project, and the politics and potentialities of community radio. Speak to long-term 3CR technician, Greg Segal, about the history of technological hardware that is showcased in the exhibition, and meet the artists to discuss their new commissions for the exhibition.
4–5:30PM
One of 3CR’s original programs in 1976 and still on the air today, ‘Jazz On A Saturday’ presents a cruisy afternoon of local jazz.
5:30–7PM
The last word goes to ‘Let Your Freak Flag Fly,’ closing the exhibition with noise, electronic soundscapes and improvised music

Check out the If People Powered Radio:40 years of 3CR Facebook Event

Supported by City of Yarra.

We are grateful to have material on loan from the Australian Lesbian and Gay Archives.