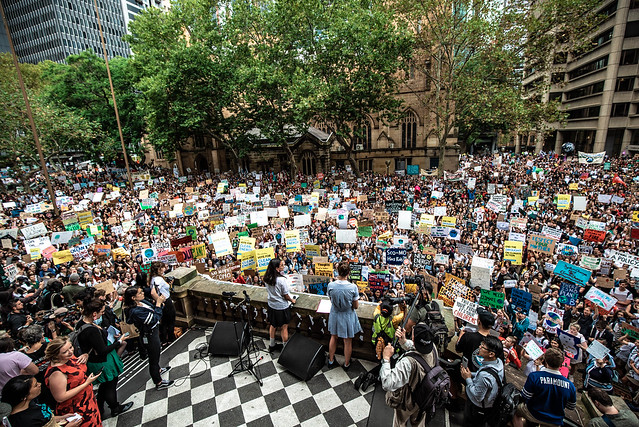 Students are calling on adults to strike for climate action on September 20th.

We start with emotional voices from Melbourne City Council as they declare a Climate Emergency. As Mayor Cathy Oke says "If we don't, I don't think I could say, hand on my heart, that we have done enough".

Vivien then talks to secondary students in Sydney, Daisy Jeffrey and Jean Hinchcliff.

From Geelong, Australian Youth Climate Commission's Kai Bowie tells us how his knowledge about Climate Chaos and the ability to act was massively boosted by AYCC. He calls on teachers to permit a free discussion and sharing knowledge in the classroom.

Uni students are represented by Cooper Forsyth whose objective in  striking on September 20th is not to leave workers behind.

These students have been on a steep learning curve since the "climate election" and are determined that the transition to a zero emissions society is a fair one and urge all workers to join them in a strike for climate action on Sept 20th. They would also like teachers to make their education underpin the new climate realities.

At the recent Education International conference in Thailand  Susan Hopgood spoke to teachers.

"Colleagues, no discussion of the future can be conducted outside the context of an emergency situation that touches us all....The most significant thing we've seen is the youth mobilisation.... their determination and commitment are exactly what we need at this crucial moment......Schools  must be spaces for learning about the power and privilege that a handful of humans are given to perpetuate climate injustice and stifle opposition."

We speak to Inez Harker-Schuch from Copenhagen University. Her computer game "CO2peration" will bring more climate science into the curriculum and she's calling for teachers to test it in Australian classrooms.

Tarun Whan is a Science and Digital Technologies teacher from Caroline Chisholm school in Canberra. He is workshopping teachers to incorporate more relevant knowledge about climate change across the curriculum.

Thanks to Mik Aidt and Jodie Green for Intellectual support and encouragement.

Tune in to 3CR August 12th /5pm for Episode 2 ,where we will talk to Unionists about striking for Climate Action.

EDEN-MONARO / A NEW RELATIONSHIP WITH THE FOREST

Coal: How did we get here and how do we get out?