Getting it done: Cycling infrastructure in Moreland and Melbourne 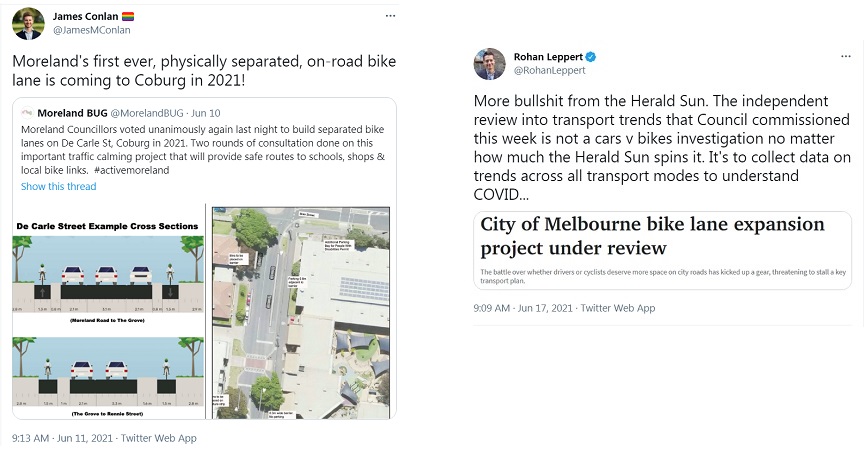 Cr James Conlan discusses Moreland Councils commitment to active transport, including future changes to De Carle Street, Coburg, making the area safer near a school, Albion Street lane work, pop up bike lanes on Dawson Street between the Upfield bike path and Brunswick Shimmy with Moreland councillors unanimously supporting these projects. Cr Conlan mentions that Moreland wants to have a proactive relationship with Department of Transport similar to that with City of Melbourne. Go to Conversations Moreland: Making walking and cycling safer in Moreland for more details and to make feedback supporting these initiatives.

Cr Rohan Leppert discusses a independent review to be commissioned into researching data on changing transport patterns as in the last 12 months, as Melbourne has built protected bicycle lanes in line with Melbourne's Transport Strategy 2030, alongside a rapid mode shift in the CBD.  Rohan talks about micromobility, massive changes to food delivery, riding for transport, a reactionary backlash against bicycle infrastructure, Alice Clarkes excellent article 'Riding a bike is sweet freedom, even if it might kill me', four years of capital works included in the next budget meeting on 29 June 2021 and City of Melbournes offer to delivery the long awaited St Kilda separated bicycle lanes.

Another reminder - it's 3CR Radiothon time: celebrate everything you love about riding your bike by making a donation to keep 3CR Community Radio and the Yarra BUG Radio Show on the air for another year and all donations over $2 are tax-deductible!

Race from the Rocks with Sarah and Jesse