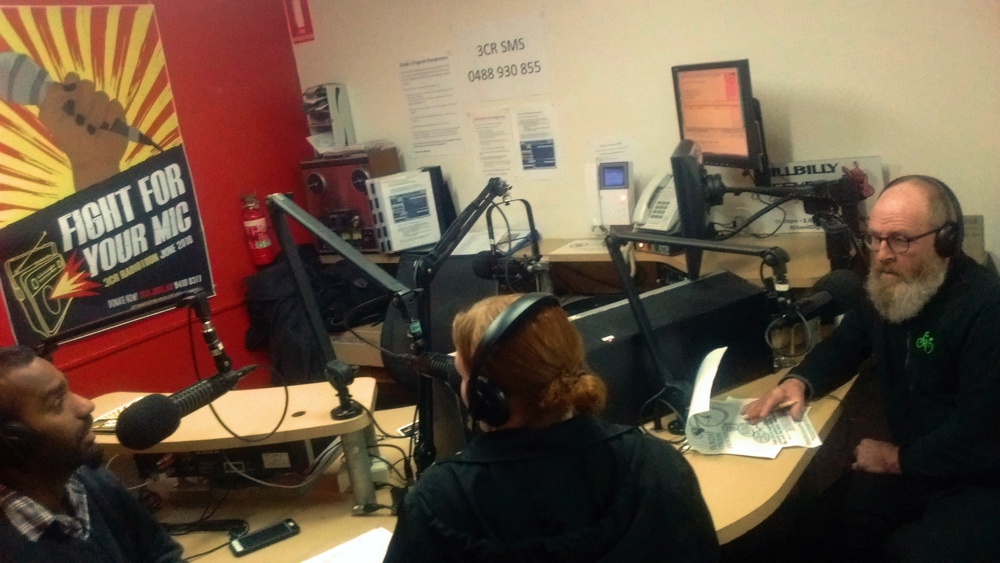 Today's show is a special live one hour broadcast featuring the entire team, Chris, Val, Steve and Faith as part of the 2018 3CR Community Radio Radiothon.

Val kicks off the show reciting "Mulga Bill's Bicycle" before Chris, Val and Steve share their bicycle moments. Next we thank those who've already donated to support the YarraBUG Radio Show and 3CR as part of the 2018 Radiothon. 3CR relies on the support of its listeners to stay on the air each year and the radiothon is your opportunity to donate and ensure that your voice and stories of others rarely heard in mainstream media are heard. Fight For Your Mic by donating here! Every little bit helps!

We introduce our studio guests Steph and Ravi who are organising the Ride for Refugees coming up next weekend. Ravi shares his motivation for the ride, and their plans to make it accessible for riders from several parts of Melbourne  to show support for long term refugees. Details of the ride and how and where to join are here.

Val shares The Man With Rubber Pedals, before we get to thank MORE donations received from our listeners and bringing us close to halfway to reaching our goal for the Radiothon! We're very appreciative of the support of our listeners, many of whom have supported us regularly over the years.

The team muse on the importance of community radio at a time when the mainstream media is narrowing its focus and perspective. We've been doing the Yarra BUG Radio Show for ten years and the best part about it is being able to give a voice to riders and their stories that they rarely receive in the mainstream media.

We take a look at some of the amazing events coming up within the next few weeks in Melbourne's cycling community including Melburn Hurt & Durt on Film at Jetnikoff Cycles, a Rad Curry Night at Curve Cycling and El Silencio: Cycling the Peruvian Andes at Commuter Cycles. These will be closely followed by a jam-packed almost-solstice-weekend of fun later in the month when there is the Swift Campout, Melburn Roobaix and Melbourne Tweed Ride. Take your pick or try all three!

We finish up with news about the Walmer Street Bridge Campaign, an issue of great importance to Melbourne riders! Finally we close with a reminder that it is not too late to donate and that you can still do so here.