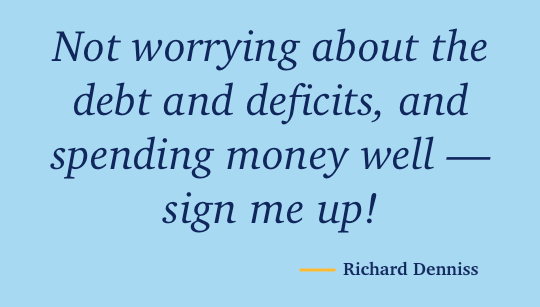 Anne & Kev make the case we need MMT to unshackle our minds from many false beliefs about the possibilities available to our new federal government. We find much to look forward to with a government that spends properly. We can prevent ourselves from becoming accidental neoliberals!

Anne & Kev bounce their ideas off a webinar featuring Richard Denniss (Chief economist and former Executive Director of the Australia Institute) as hosted by the New Economy Network Australia (NENA).

The Deficit Myth with Stephanie Kelton
in conversation with Richard Denniss, Chief economist and former Executive Director of the Australia Institute
June 18, 2020

Then leader of the Opposition, Tony Abbott,
speaking with host Fran Kelly on ABC's RN Breakfast, back in February 2010.

Quiz Show Background Music Loop with changes
by Alexander Blu
The song is permitted for non-commercial use under license “Attribution-NonCommercial 4.0 International (CC BY-NC 4.0)”