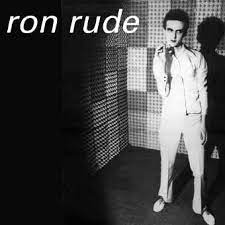 The following history of Ron Rude comes from the Punk Journey website. punkjourney.com a web site set up by Melinda Von Waywood who's aim is to research, document, preserve and digitally showcase the history of the Melbourne punk scene from the years 1977-1987, as well as celebrate and promote Australian punk subculture through recognition of the contribution that it's made to historical and contemporary cultural heritage.

Back in 1979 Ron Rude knew that he didn't stand a chance of landing a record deal, so he turned his Belgrave home into a budget recording studio, lined the walls with egg cartons from the poultry farm next door, and recorded an album, 'The Borders of Disgrace', which he put out on his own label 'Unforgettable Music'. He made news by being the first artist to finance a commercial release using a $1000 cash advance courtesy of his guitar player, Stephen Clarke's credit card.

In 1980 Rude, this time with his own credit card and band Piano Piano made another album at home, 'The Vorpal Blade'. To promote it he went on a hunger strike in the window of Missing Link, an alternative record shop run at the time by Archie and Jugheads records founder Keith Glass, and making news, he demanded that local radio station 3XY play his records, threatening to drown himself in a bucket of water if they did not. His slogan, "3XY or I Die" was intended to show that the major mainstream rock station of the day would be unlikely to give a small-time independent artist a go. TV Channel 10 covered the story, and Rude had the momentum that he wanted. His next move was to make good a threat to drown himself on Hans Christian and Barry Bissel's morning 3XY program. The DJ's relented, and played excerpts of the album as Rude bubbled away with his head in a bucket of water.

Buoyed by this minor victory, Rude took on ABC TV's Countdown host, Ian "Molly" Meldrum, chaining himself to Meldrum's fence to try to gain a spot on the show. Meldrum acted swiftly, absconding before the TV news crews arrived. Rude's live debut was a masterpiece of comic punk showmanship. Supporting a well-attended conventional rock band, Rude took to the stage clad in greasepaint and leather and charged into the audience playing echo driven guitar solos, and singing "Violence! It's the only way!" His other guitar player, Geoff Martin, played guitar with his teeth, a la Hendrix style, but without the tunes, and the drummer, clad in full Darth Vader regalia eventually knocked over all the drums because the mask obscured his vision. Three amply endowed girl backup singers called The Fanny's bounced their breasts in time to the music, to roars of applause by those in the audience who would be moved by such a spectacle.

To this day Ron Rude is is considered to be a pioneer of DIY (Do it Yourself) recording and in 2001 Melbourne playwright Kieran Carroll wrote a play called 3XY or I Die which tells the story of Rude's hunger strike.

Ron has recently completed a double album Morphio/The Universes, recorded at his home studio in the Dandenong's a glorious collection of beautiful melodies and Ron's unique singing style for release later in 2022. Hear tracks from the album introduced by Ron Rude in a style that's uniquely Ron's on this edition of And This One's Introduced By...

And This One's Introduced By... John Durr introduces the songs from his album Fading Rainbow Blues

And This One's Introduced By... Gary Hallenan & Glen Burns introduce the songs from the album A Comedy Of Horrors by Burn In Hell

And This One's Introduced By... Garry Gray introduces the songs from the album We Mainline Dreamers by Garry Gray & Edward Clayton-Jones

And This One's Introduced By... MJ Halloran introduces the songs from the album Woke Up And Seen My Reflection