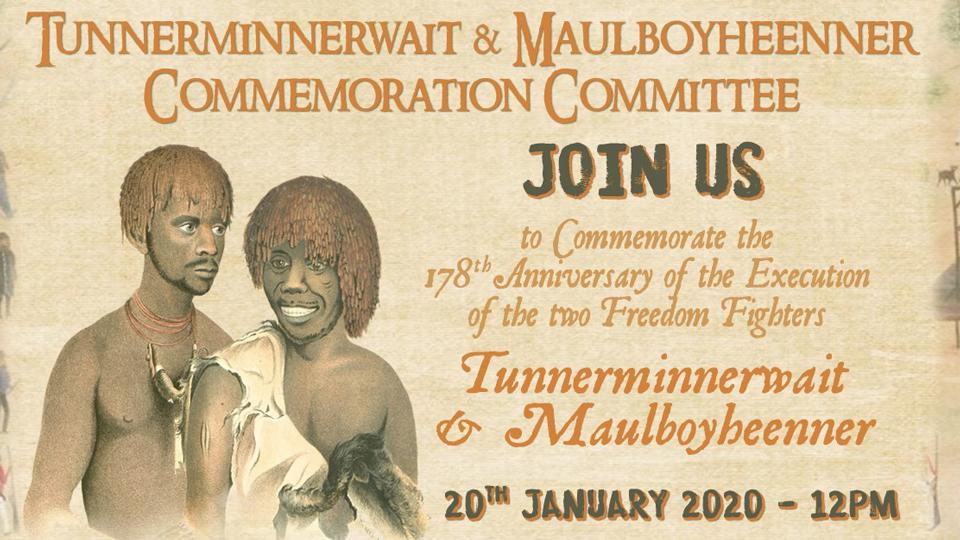 In 1842 two indigenous freedom fighters, Tunnerminnerwait and Maulboyheenner, were the first men executed in Victoria. Since 2004 the Tunnerminnerwait and Maulboyheenner Commemoration Committee has worked towards the building of a monument in Melbourne to mark this pivotal event. The Melbourne City Council had the foresight and courage to support this project and funded the building of a monument at the execution site, at the corner of Victoria St and Franklin St, opposite the Old Melbourne Gaol, in September 2016. This is the first monument to the Frontier Wars that has been built in a major city in this country.

Reconciliation between indigenous and non-indigenous Australians is based on the recognition tens of thousands of Aboriginal and Torres Strait Islander men, women and children died as a result of the colonisation of this land. On the 20th January, Aboriginal and Torres Strait Islander Freedom Fighters Day, the Tunnerminnerwait and Maulboyheenner Commemoration Committee holds a public ceremony to honour the indigenous men, women and children who, during the colonisation process, were killed for protecting their lands, their families, their culture and a way of life they had practised for over 40,000 years.

The Tunnerminnerwait and Maulboyheenner Commemoration Committee believes your participation in this ceremony on Monday 20th January 2020 would help to kick start the stalled reconciliation process between indigenous and non-indigenous Australians.

After the commemoration JOIN US as we silently walk from the execution site to their last resting place at the eastern end of the northern wall that divides Melbourne's Queen Victoria Markets, to acknowledge their just struggle. (please bring flowers)

The first hour of the Commemoration will be broadcast live on 3CR Community Radio – 855 on the AM dial and streaming live on www.3cr.org.au

The microphone will be opened to the people attending the commemoration to air their views after the guest speakers have spoken.

We hope to see you on the day.
Dr. Joseph Toscano / Convenor Tunnerminnerwait and Maulboyheenner Commemoration Committee