The Desert Pea and The Frontier Wars March on Anzac 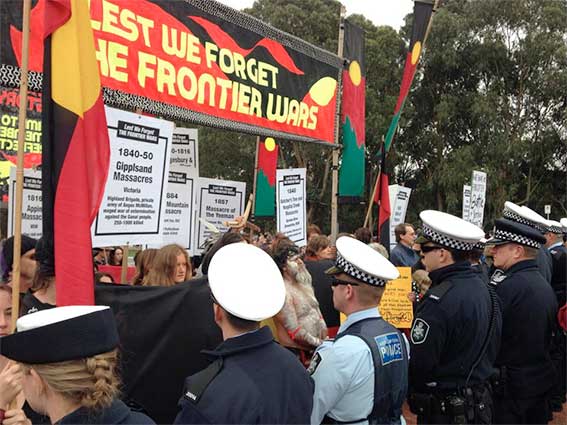 The Australian frontier wars were a series of conflicts fought between Indigenous Australians and white settlers during the Brittish colonisation of Australia.

Hear from two activists who decided eight years ago  to make banners that remember the frontier war conflicts and join the Anzac march on Anzac day in Canberra to be met by a police line. Now the march has become an annual event attended by hundreds of people with similar actions springing up in other parts of Australia.

Hear  Hazel Davies: a florist activist who tells the story of the desert pea as an indigenous blood flower, the native equivalent of the red poppy as a symbol of the Frontier Wars. Hazel is teaching others to make Desert Pea wreaths to commemorate the Frontier Wars.

" we show to the public that here is a desperate need to tell the truth about the colonisation of this country and the devastation wreaked upon First Nations Peoples. We need to remember those who defended their rights to their country; who volunteered to fight for their country in modern wars, despite being treated as second class peoples": Sovereign Union

Michael Ghillar Anderson; a Gomeroi and Euahlayi man  -one of three people who set up the Aboriginal Embassy in 1972 and  leader of The Frontier Wars March on Anzac.

Hazel Davies: florist activist working with the Desert Pea as a symbol to commemorate the Frontier Wars; making wreaths and cloth poppies with children and adults as an educational and healing activity.

Graeme Dunstan: master  bannermaker; an organiser who has contributed his banners to every Frontier Wars March on Anzac

Thanks to Wikipedia for the information about The Frontier wars: