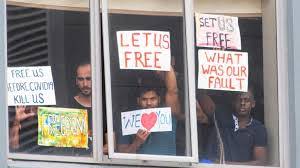 Marisa interviewed Samantha Lee from Redfern Community Legal Centre about increased police powers and the Pandemic, including Health measures and how to work within the framework to safely protest. In particular, there was a discussion about violence by police towards protestors and community members in Nsw.
Marisa also interviewed Moz, an asylum seeker who is detained in a locked room at the Mantra Hhotel, along with other asylum seekers. The interview focused on Moz's experiences in detention centres all over Australia, and his subsequent arrival in Australia as a result of the Medivac Bill which was scrapped. Moz's untreated health issues were also discussed.

refugees and the mantra hotel