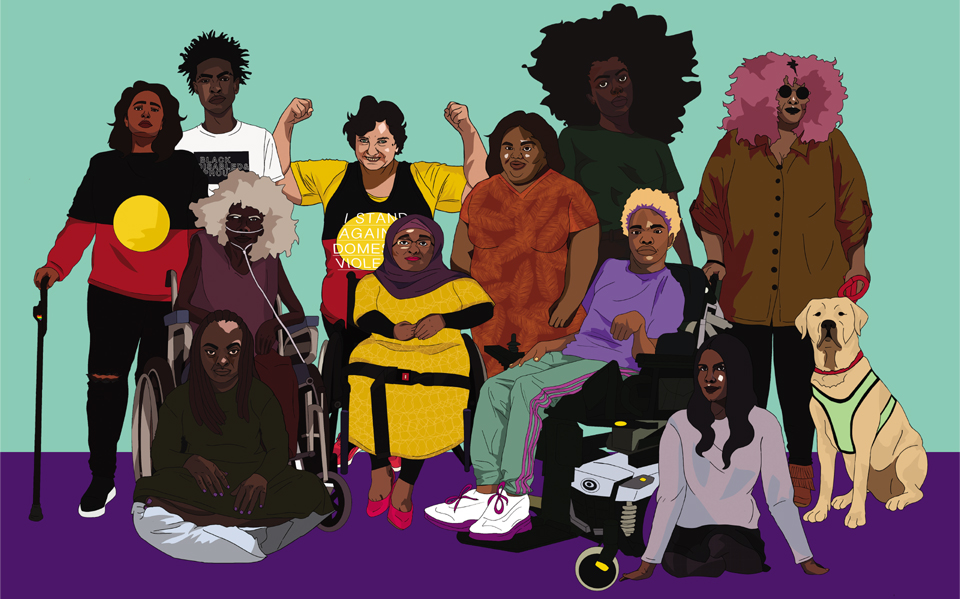 On Disability Day this year hear from BIPOC (Black People, Indigenous People, and People of Colour) with various kinds of disabilities across 12 hours of dedicated programming. On 3 December from 7am-7pm we'll feature 'Power from the margins' covering BIPOC perspectives, live music, artists and discussion. Standby to tune in! Thanks to Rukaya Springle for this year's poster artwork. 2019 program coordination by Pauline Vetuna.

Image description: A colourful digital illustration of a group of people with different visible and invisible disabilities, gathered together in a group. They have different skin tones, and appear to be different ages. One of the people illustrated is Jane Rosengrave; she is flexing her biceps and wearing an Aboriginal Flag t-shirt.

POWER FROM THE MARGINS SCHEDULE

8.30am – Disabled Parent, Disabled Child & the NDIS
Cubbie Mako is a migrant POC with disabilities and parent of a child with Downs Syndrome, cancer and hearing impairment. They share lived experiences and powerful advice from the trenches as they navigate the complexity of the NDIS for their child and family. They also discuss ableism and mental health stigma in their Filipino community. Listen now. Read transcript.

9.00am – DSP DENIED
What do you do if your disability isn't recognised as a disability by the state, but your disability reduces your capacity to work in a capitalist system? Young Fijian Mereani Qalovakawasa talks to Pauline Vetuna about her experience of living with Lupus on Newstart, being stuck in a suburb with rising rent costs because of gentrification, and much more. Listen now. Read transcript.

9.30am – Dirt Radio: Climate Change & Disability Special
People with disabilities indigenous to the Pacific will be amongst the most impacted by climate change, and yet must fight to be included in Climate Change response planning in the islands. Dirt Radio chats with Fiji Disabled People's Federation’s Nafitalai Uluinikorotabu about this fight. Cubbie also talks about climate change impacts on their family and the NDIS. Listen now. Read transcript.

10.00am – FREE AS A BIRD
Deadly advocate Jane Rosengrave is free as a bird - but the road to freedom was long and tough. Jane talks about leaving abusive relationships, fighting institutional abuse, finding her power and independence through self advocacy. Listen now. Read transcript.

11.00am – Billabong Beats
The Billabong Beats structure is modelled on an aboriginal camp with a water-hole segment & a fire segment, giving a voice to both Kulin & Western Kulin peoples, hosted by Gavin Moore, a Wemba Wemba man from the Southern Riverina area. Our guest for international day of people with a disability is CEO of Connecting Home - a service for the Stolen Generations - and their NDIS crew talking about how Aboriginal people with disabilities can access the NDIS. Listen now. Read transcript.

12.00pm – Melody Shotade
Get up close and personal with Melbourne-based artist with a disability Melody Shotade (Nigerian, Australian), discussing the healing power that tuning into her artist soul had - and continues to have - on her. Listen now. Read transcript.

12.30pm – Abdallah & Sara
Ayan Shirwa, Pauline Vetuna and good energy in the studio with Abdallah, an actor and dancer with Down Syndrome, and his beautiful mama Sara. Abdallah was seen in Fatima Mawas’ short film ‘Amar’ and is part of the dance troupe e.motion21. This show was recorded live during 3CR’s ‘Power the Margins’ broadcast. Listen now. Read transcript.

2.00pm – Young Black Disabled & Proud
Being a Black, Queer, and Disabled Woman is complicated. Leilani chats to friend Ngino Amum about her intersectional experiences of being a teen with a disability in Australia. Listen now. Read transcript.

2.30pm – MENTAL HEALTH & RELATIONSHIPS
Gemma Mahadeo talks about the challenges of queer dating as a person of colour living with psycho-social illnesses. Ana Maria Gomides talks about having to train her white therapist in racial literacy in order to build a patient-therapist relationship that would be safe for her as a person of colour. Listen now. Read transcript.

3.00pm – ‘Communities, Discrimination and Disability’
Hear from CALD people with disabilities and representatives of the Centre for Culture, Ethnicity and Health.

4.30pm – Self Advocacy
Alice Wong is an Asian American disability activist, media maker, and consultant based in San Francisco. She is the Founder and Director of the Disability Visibility Project® (DVP), an online community dedicated to creating, sharing and amplifying disability media and culture created in 2014. It includes the Disability Visibility Podcast. This episode explores what self advocacy is with two people who identify as self-advocates: Noor Pervez and Finn Gardiner. Listen now. Read transcript.

5.00pm – TUZUNGUMZE: Africans with Disabilities in Narrm
The majority of African emigrants to Australia are from southern and eastern Africa. In this special, Pauline Vetuna spotlights just some of the experiences of eastern and southern Africans living with disabilities in Melbourne. Hear from Hamile Ibrahim on Africans with disabilities living on the margins of the margins in the suburbs. Also hear from Faro Musodza on self management of NDIS planning ; and Serious_Meerkat on non-western modalities of healing from trauma. Narrated by 3CR's Ayan Shirwa. Listen now. Read transcript.

6.00pm – ABLEISM IN THE SETTLER COLONY
Race and disability are both criminalised in colony-Australia, so what happens to people living at the intersection of both? Hear from Latoya Rule, Indigenous prison abolitionist activist on a poorly understood intersection.
Australia's immigration system - and the control of borders - has historically been both racist and ableist. Dominic Golding discusses the research project he did on immigration and disability.
Also hear from Ex-Detainees/Refugees about the harsh realities affecting ex-detainees with disabilities caught up in the border imperialist project. Listen now. Read transcript.

Disability Day 2019 is proudly supported by the City of Yarra 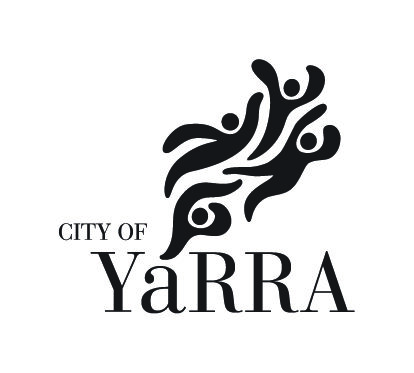 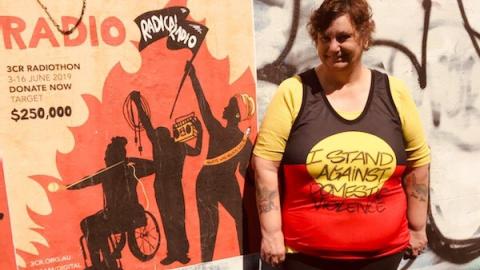 Friday
Following up 2021’s “Grounding Disability Justice”, for 3CR’s Disability Day 2022 Broadcast in year three of the pandemic, we’re talking about REST as a necessity for our survival, the ways disabled people are habitually denied both rest and income, reflections on disabled rest and joy, ACCESSIBLE rest for collective survival, and more.

Power from the margins! This year's 12-hour broadcast focuses on the voices of Black and Indigenous People of Colour (BIPOC) with various kinds of disabilities.