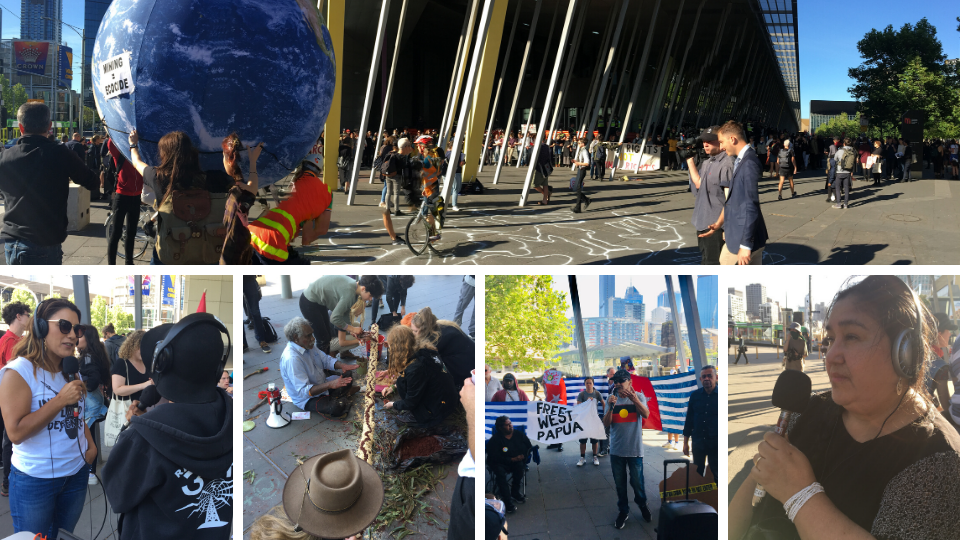 3CR has a long history of presenting live coverage of union and social justice protests, blockades and occupations. This October we covered the Blockade IMARC peaceful protests that disrupted the International Mining and Resources Conference events at the Exhibition Centre in Melbourne from 28-31 October.

The event brought together First Nations people from around the globe, students, environmental, climate justice, human rights and trade union activists and organisations to stand together in solidarity to "Blockade IMARC”.

The IMARC conference saw the gathering of multinational companies that profit from operations that are fuelling climate change, stealing Indigenous land, displacing communities and exploiting workers.  This blockade took place on stolen lands of the Boonwurrung and Woiworung people of the Kulin Nation.  Indigenous people worldwide are the most affected by mining and lead the resistance globally and their voices were at the forefront of the activities.

Anarchist World This Week 30 October: The iron fist out of the velvet glove
Joe discusses IMARC with a focus on how the manner in which state institutions support criminal mining cartels, then crosses live to the IMARC blockade to speak with a West Papuan student activist.  Listen here.

Earth Matters 6 Oct: Fighting mining from Ecuador to Australia
Mining is at the forefront of climate change, and the opposition to it is the nexus of indigenous and environmental struggles. A prime example of this is Ecuador. It’s one of the most bio-diverse countries on earth, but it’s people and environment are under threat as mining companies - many of them from Australia - are swooping in. Guests: Anthony Amis (Melbourne Rainforest Action Group); Maria Soupos (Blockade IMARC Alliance). Listen here.

Radioactive Show 2 Nov: Blockade IMARC - First Nations resistance to mining
We hear from from First Nations front-line communities on their struggles against mining & resource extraction. Uncle Ned Hargreaves, from Yuendemu in the Northern Territory, Wiradjuri activist Tim Buchanan, and Aunty Vicki Abdullah from Leonora in Western Australia joined allies in Melbourne to speak out on extractive industries on their land.  Listen here.

Sunday 1:00pm to 2:00pm
3CR has a long history of presenting live coverage of union and social justice protests, blockades and occupations including the Honeymoom Mine occupation, the nurses dispute (including the 2012 nurses dispute), the MUA picket, the S11 World Economic Forum protests, Occupy Melbourne and more recently the TAFE4ALL campaign.

The campaign to bring Assange home is on tour from Melbourne to Canberra during February & March 2021.