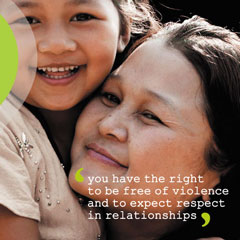 This project was developed by the Victoran Women Lawyer’s justice committee in response to concern that migrant women are not reporting domestic violence because they don’t know their legal rights in Australia. The project has resulted in the development of 3 radio announcements airing on radio station 3CR’s Arabic language programs covering areas of relevant law: family, domestic violence and immigration law. Funded by a Victoria Law Foundation grant, managed by Satu Marjaana Aho.

Excerpts taken from the Law Institute Journal about this project:

“Arabic was chosen as the first language, in order to cover the widest possible geographical areas from which the migrants come to Australia,” Ms Aho said. “If this project continues in the future, the next announcements will be in other languages, similarly covering the widest possible migrant groups."

The announcements direct women to project partner InTouch Multicultural Centre Against Family Violence, which has translated them and provides free, confidential advice. Its case workers are on the frontline, working with clients facing domestic violence.

In its 2010 report on barriers to the justice system faced by women from culturally and linguistically diverse communities experiencing family violence, InTouch found they were less likely to report it. They were often quickly discouraged from progressing with their complaints and commonly waited until crisis point to seek help. The latest Victoria Police crime statistics showed more than a third of all crimes against the person in the 2012-13 financial year in Victoria related to family violence – up 21.6 per cent on the previous year. Chief Commissioner Ken Lay said the increase in the past 10 years was almost 400 per cent. “We don’t think we’ve seen the extent that this horrible crime is having on our community,” he said. “It’s insidious.”

Ms Aho said the project arose from a 2010 VWL research paper “Addressing the Unmet Legal Needs of Migrant Women in Victoria”, identifying major challenges for these women in accessing justice. It identified three key reasons for their high rates of unreported domestic violence: lack of knowledge of their legal rights in Australia, language and cultural barriers.

“They (VWL) wanted to do something about it,” Ms Aho said. “The original idea was to make pamphlets and brochures and distribute them in places migrant women could see them. But if literacy was an issue, we then turned to the idea of radio which would reach women in their homes. “Also, often an abusive partner will act as a gatekeeper to information, especially if they are more proficient in English.”

Listen to the announcements here: