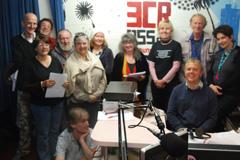 Over a year in the making, and featuring the talents of dozens of rooming house writers, Dredgewater Daze is a six part radio play that's sure to show you a different side of rooming house life.

Dredgewater Daze tells the story of the fictional Dresden Hotel, a rooming house that has seen better days. As the play opens residents face eviction as rumours circulate about the house getting shut down. Colourful characters and twists abound as the plot unfolds. There’s the mystery of the hidden stash, romance and even a wedding!

Dredgewater Daze will be broadcast on 3CR during the Roominations show, every Thursday from 12pm to 1pm starting from 29 April.

The radio play project was coordinated by Roomers and funded by the City of Yarra through their Community Grants.