This week on Brainwaves we talk to one of our wonderful team members Suzie. Suzie is keen to tell you her story of personally overcoming great phobias, in order to inspire others to do the same. Interestingly she unknowingly used graduated exposure therapy, which she later learnt about in her psychotherapy studies.

Suzie's story of how she overcame 3 phobias’ unknowingly by using Graduated Exposure Therapy.

Most of us have reasonable and unreasonable fears. Some may impact the quality of our life, and our self-esteem. I guess if one has a fear of sky-diving, one can easily avoid doing it without undue impact. However, in life sometimes it is better to face fears head on. After all, they are a thought process, and can be changed!

I had a terrible fear of spiders, quite illogical when you compare the size of a spider to the size of myself. In my youth, sadly a lot of these critters died at my hand, usually while I was screaming somewhat hysterically.

In Australia spiders are everywhere!

As such, continued exposure allowed me to feel sorry for them. A particularly large spider is the Huntsman, which can be the size of a man's hand. They often take us by surprise, emerging unexpectedly from sun-visors in cars. Many an accident can be attributed to them.

Whilst they still are not my favourite thing, nowadays I easily cover them with a glass, slide paper underneath, and release them into the garden. Of course, they often make their way back into the home!

Another fear I share with many of you, reportedly more common than a fear of death, is a fear of speaking in public. Mine was more than just a fear; it was a full-on phobia I lived with for about 50 years!

In my late twenties I was in a very senior hospital management position, but avoided large group meetings like the plague. I got away with it too! However, a course I was doing at university at the time required me to do a 20 minute presentation to the class. Suffice to say, after months of torment about this unavoidable assessment, I nearly quit the course, which I had virtually completed. In the end I practiced and practiced, and did the presentation. I did well, but it felt like it took years off my life! As I looked around the room, I saw most people, all senior managers, were barely listening. They were sweating over THEIR upcoming assessment.

Since then, circumstances have required me to stand in front of a room and speak on numerous occasions.

I absolutely HAD to honour my beloved father, and speak at his funeral. No-one in my family could do it. We are all quite introverted and shy, and being the eldest, I felt the responsibility. Even though I knew virtually everyone there, my knees were knocking together, as they had at my best friend’s wedding when I did a brief reading in my 30's.

It helped that a friend stood next to me at my Father's funeral, ready to take over. I was basically reading from a script, but remembered to look up at the top of people's heads, never making eye contact. Not being stood alone helped.

When I was 54 I did a placement on a mental health unit during my counselling degree. I had it as a goal to co-facilitate a group therapy session at the end of the 12 weeks. However, my supervisor was not having a bar of it. I had to run an educational group after just 1 week...a 90 minute educational session! I had no choice but to do it, as I would not have completed my degree otherwise. I scripted the whole session, and engaged the audience as much as possible. The more they contributed the less I had to do! I ran about 6 of these during the placement. When I could I sat down, to keep me at the same level as the audience. I was actually quite good at it, but did not enjoy it at all! A psychologist who worked there said that it was likely one day I might enjoy public speaking. This has yet to come to pass!

Then came speeches at my son's 21st, engagement, wedding, and an organisation I am involved in. As a political activist on human rights issues I have also been involved in activities that put me in the spotlight, albeit with other people, which is easier.

I would advise anyone in a similar situation to go to the venue to familiarise yourself with the room, and practise in an empty room from the stage, pulpit or whatever. Make sure you know your subject well.

I took the advice of a friend on most of these occasions to write a poem, as poetry is easier than a big speech, and warms the heart of an audience. My poems tend to be quirky and humorous. I really saw my fear of public speaking as a weakness, and was determined to beat it.

And now for the final phobia I overcame. This HAD to be done.

Unexpectedly about 10 years ago I had what appeared to be a classic anxiety attack whilst deep within a cave in the Margaret River in Western Australia. I have always loved caves, despite reading Tom Sawyer, and never had such an experience before or since!

I was tired, hot and bothered, and whilst waiting with my husband to descend into the cave, I was aware there had been a small earthquake the day before. Then, the tour group before us started to exit, and what concerned me was how we could hear them panting long before we could see them! I was very unfit at the time, too.

As we descended into the cave I realised why the other group were so out if breath...the stairs were very steep and went a long way down. As we arrived into a dark, cavernous chamber, I saw tree roots hanging from the ceiling, and thought that I would not want to be here in an earthquake. I also decided to be the last to ascend as I would be slow, and did not want people behind me noticing my rather large backside.

Then the tour guide informed us that there were 2 more lower levels, but that the carbon dioxide level was quite high, and anyone wanting to leave should do so now. I decided to go.

My husband was shocked. He resisted but I said I would happily go up alone. He could complete the tour. As I climbed the steep stairs in the semi-dark, I suddenly collapsed, panting for breath. My pulse was over 200 beats per minute. I knew to try to control my breathing. I thought I might have a heart attack, and I yelled for my husband, who came pounding up the stairs, bumping his head on a rock! A ranger was sent down to help me. On return to the surface I was in shock, shaking, and quite disturbed. However, I insisted in going to another less deep cave straight away. I spent the whole time looking back at the entrance. I did not enjoy it!

Unfortunately, when I returned home to Melbourne, I became frightened of having a similar episode when driving through tunnels. In Melbourne there are 4 tunnels, quite deep and long, that it is hard to avoid. I literally could not go in them even as a passenger to start with, but gradually confronted this by having the air-conditioning on full blast in my face, playing my favourite songs and singing at the top of my voice as a distraction. I insisted my husband stayed in the left lane. There had been a terrible fatality in one of the tunnels only recently, and I was terrified of causing an accident.

I tried numerous times to drive through the tunnels, but always took an exit beforehand.

Eventually I was able to drive doing all the previous things, with my husband as a passenger. The more I did it, the greater my confidence, and after close to 2 years I was able to navigate tunnels on my own. Nowadays I don't even realise I am doing it.

Whether it was an anxiety attack, or an episode triggered by low oxygen, which I tried to convince myself it was, I will never know. But it is a pretty classic experience of an acute panic attack.

With graduated exposure therapy, one firstly must have a desire and determination to overcome one’s fear. Different types of psychological therapy and counselling can assist. This might involve firstly visualising doing the activity. In the case of spiders, it could start by learning about them, looking at photographs, then videos, then seeing them in the same room. Then closer up. It basically involves desensitisation. Relaxation techniques can be used to assist.

An alternative method of overcoming fears is called Flooding. This involves prolonged and intense exposure to whatever is the issue. Apparently the anxiety decreases on its own over time. This can be done either in real life, or via the imagination. However, this technique is not for everyone and not for every circumstance, as it may have unintended negative consequences.

In conclusion, I recently drove through tunnels to get to an event whereby I had to stand up in front of 170 people and give a speech. I had the audience in stitches with my quirky poem and brief speech, and was told I may have missed a career as a stand-up comedian!

I went straight to the bar afterwards and calmed my nerves with a wine. But I did it.

Not sure if I will venture into a cave again, but I just might!

And we have an abundance of happy spiders, even Harry the Granddaddy Huntsman living around our home in the forest, in complete safety!

So I hope that whoever is reading this can take heart that most fears and phobias CAN be overcome. 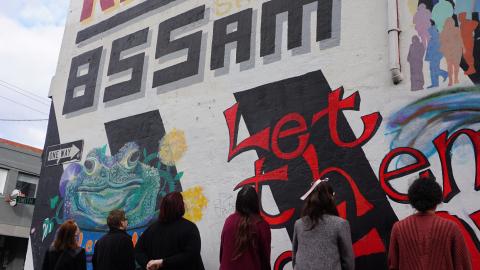 Alex Devantier - Lived experience with an Eating Disorder and PTSD