3CR Tamil Manifest is an English radio program which goes to air 1pm every Saturday on 3CR Community Radio. It aims to inform the wider Australian community about Tamil people's fight for the restoration of their traditional homeland in the North and East of Sri Lanka.

The pursuit of genocidal policies against Tamils by successive Sri Lankan governments peaked in May, 2009, when according to the UN, an estimated 70,000 innocent civilians were deliberately slaughtered by the Rajapaksa regime.
A 26-year armed resistance was silenced with this monstrous war crime and crimes against humanity.
However, the war, and the genocide, goes on for Tamils in their traditional homelands in the north and the east of the country, where a brutal military occupation continues to oppress the population.
In response, thousands of Tamils around the world are fighting back, with words and actions that are gradually alerting the world to the reality of Sri Lanka today.
Tamil Manifest aims to flush out the facts and give people the discomforting truth that the new Sri Lankan regime is continuing previous Government's genocidal agenda.
The world is gradually waking up to the lies and falsehoods disseminated globally by the government, and its’ apologists. Tamil Manifest is a significant contributor to this awakening.

In 1983 ethnic riots came to a head in Sri Lanka. For the first time the outside world heard about the genocide of the Tamil people and as a consequence of the upheavals many Tamils migrated abroad, including to Australia. The Tamil Association, already established in Australia, felt that the real story of the Tamil people hadn’t come out and they approached 3CR in 1984 for a program. The Tamil Association viewed the SBS Tamil program as only giving the Sri Lankan governments perspective and felt encouraged by 3CR’s reputation as giving a voice to the underdogs. Tamil Association’s representatives Gopal and Jeyakumar were amongst them, and were trained in a garage in Armadale. None of them had prior radio experience. Initially the program, Tamil Voice, was broadcast in English in a 30 minute prerecord which focused on politics and news from Sri Lanka.

Current presenter Sabesh Sanmugam came to Australia in 1989 and was on the very next week at 3CR! He had written a political article that had came to the attention of Tamil Voice and they asked for him to read it on air. He was too nervous to read it himself but his career in community radio had now been launched. Sabesh’s wife Shashi also helped in reading the news in English. Sabesh remembers that when their two children were born he would take them into the car in their carport while Shashi would record her section of the Tamil voice in the quiet house. When she flicked the house lights around 11pm, he knew that he could come back into the house with the kids!

In 1997, a new show Tamil Manifest was created as the Tamil Voice presenter realised that this show would also provide a window into the Tamil experience for the broader Australian audience and also there was a younger audience that needed to be catered for in English. Sabesh believes that Tamil Manifest may be the only Tamil radio show in English worldwide.

Tamil Voice has always been a fantastic raiser of funds for 3CR’s Radiothon. For the last 13 years the Tamils have also done Xmas Radiothons on the 25th of December each year, to raise funds for the Tamil Rehabilitation organization that stage projects in Sri Lanka. For the last four years Tamil Voice has been raising funds on Good Fridays for AUS MED AID to give basic medical facilities for the Tamils in Sri Lanka. Sabesh is very proud of the fact that Australian people are supporting the Tamil struggle and Tamils in Sri Lanka through this fundraising. In fact Sabesh believes that the 3CR’s and the Tamil Association’s support of the Tamil program has facilitated much of the current community work being done. In the early days 3CR withstood pressure to not give voice to the Tamils. Sabesh remembers that graffiti was found at 3CR and the city, stating that 3CR supported terrorism through broadcasting the Tamil program.

Now in its 22nd year the Tamil Voice program continues to broadcast politics, news and announcements with interviews with community leaders in Sri Lanka and locally. Current presenters are Sabesh, Nesan and Ravi Krishna. The presenters of Tamil Manifest are Prasanna, Gopan & friends. Tamil Voice also can be heard in Sydney and Canberra through the Sydney 24 hour ‘InpathThamil Oli ‘(a Tamil radio station) that calls Sabesh’s house to connect to the Tamil Voice. Visiting Tamil speakers to Melbourne often ring up 3CR to commend the program for its issues and presentations. Political analysis can be read in various Tamil web sites. 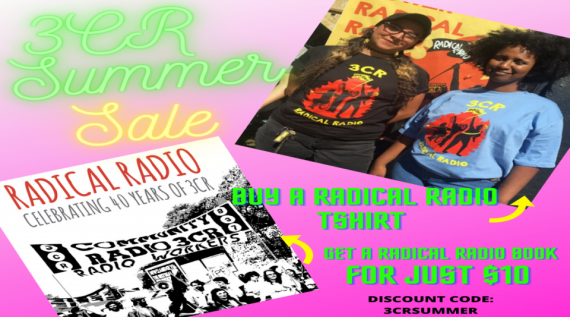 Who doesn’t love a summer bargain! Buy a 3CR Radical Radio t-shirt in any style and get our Radical Radio – Celebrating 40 years of 3CR book for half price at just $10. Available on our online shop 3cr.org.au/shop  Just enter the discount code 3CRSUMMER on checkout. 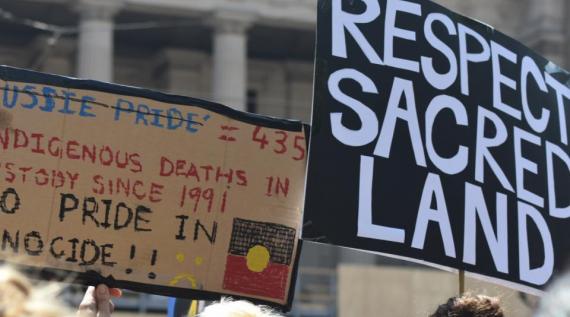 This Thursday is Human Rights Day and we'll be placing the spotlight on Armenia, First Nations rights in Australia, the relationship between the far-Right, misogyny and gendered violence, sex worker discrimination and much more. Catch specials throughout the day - more details here. 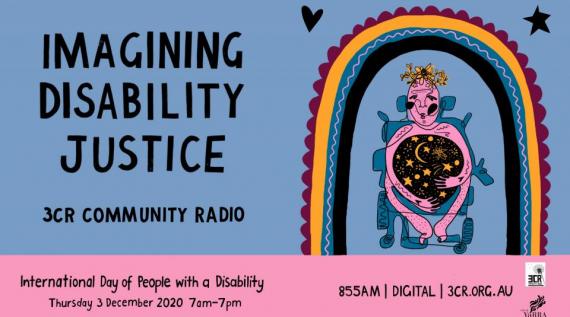 Image description: image is a poster with a light blue and pink background. It features a digital continuous line drawing of a disabled person in a blue wheelchair. The person is holding a large black sphere, filled with moon and stars. It looks as though they are literally holding space. There is a burgundy, mustard, blue and black rainbow above the person’s head, with a black heart and star on either side. Black text on the poster reads: “Imagining Disability Justice. 3CR Community Radio - International Day of People with a Disability. Thursday 3 December 2020, 7am-7pm.